Time for an Icelandic power-play?

This year's European power crisis might have one unexpected spin-off

For almost as long as I've been writing about data centers I've been hearing that Iceland is a perfect location for them.

But for all this time, I've seen the country's data center struggle to find its identity. If we are honest, despite a host of inbuilt advantages, Iceland has made smaller inroads into an exponentially growing European market than its proponents would have hoped.

Why is that, and could it be about to change?

Cheap green power is not enough

The biggest reason to locate a data center in Iceland has always been the plentiful renewable energy.

Most of this electricity comes geothermal energy and hydroelectric sources, which are operate continuously providing two baseload green energy sources.

Ten years ago, I visited the country and the utility Lansvirkjun showed me huge hydroelectric power stations, and the Hellisheiði geothermal station, which produces 303MW of electricity, and as a byproduct generates 133MW of heat energy in the form of water at 82°C, which provides all the heat needs of nearly a third of the entire population of Iceland.

Data centers in Iceland don't need chillers, as the climate allows for outside air cooling. They also have increasingly good fiber connections with the rest of the world. But, I was told on my visit in 2012, the magic bullet was that utilities were ready to offer world-beating electricity prices, locked in for decades, and backed with 100 percent SLAs.

Given that, you'd expect the rocky North Atlantic country to be building data centers rapidly. Iceland had big ambitions. Back in 2012, the country said its renewable energy would power one percent of Europe's data centers by 2020, which it considered would amount to 1.5TWh.

In reality, Iceland still only has a moderate sized market, roughly a third of what the state power company was hoping for.

According to Einar Hansen Tómasson of Invest in Iceland, the country now has some eight locations where data centers operated by three major players: Verne (now owned by Digital 9); Borealis Data Center, a company bought and sold by Etix Everywhere, and probably best known for its Bitcoin activities; and atNorth, a pan-Nordic which operates a series of data centers called Thor, Mjolnir and Sif.

Historically, we know that it takes a huge amount of change to shift capacity from historic data center hubs. But with a difference in price this striking, data center operators must be looking again at Iceland

We can use a back-of-the-envelope calculation to work out that Iceland probably has around 60MW of data center capacity. Landsvirkjun's annual report for 2021 says the company generated around 14TWh electricity in that year, which is around three-quarters of the total electricity produced in Iceland. The report also says that data centers made up about three percent of Landsvirkjun's demand. There's scope for error in this, but that seems to work out at about 0.5TWh total energy used by data centers in that year..

That would be 60MW of data center demand if it's all on continuously.

The four FLAP markets (Frankfurt, London, Amsterdam and Paris) are each expected to have 1GW of capacity in 2023. Iceland is hovering around the level of Warsaw.

The early data centers in Iceland were conceived as colocation spaces, where European customers would put applications that wanted cheap power.

It turned out there wasn't a huge demand for that, because of the slow response of data center in Iceland, (high latency), so providers like Verne shifted to a focus on high performance computing (HPC), performing demanding jobs such as simulation for BMW where response times were not crucial, and eventually offering HPC as a service.

On paper, it may have looked ideal for the cloud, but during the 2010s, Iceland did not attract a large hyperscale facility, like Facebook's Lulea campus in Sweden.

My guess is that hyperscalers felt it was too remote, and the scale of the country might make a giant facility difficult to build, but sources at Invest in Iceland dismiss this, pointing to the giant plants that were constructed when the country got into aluminum smelting as another way to capitalized on its electricity surplus.

In any case, industry buzz is shifting to the Edge, where the latency of facilities in Iceland would surely make them less likely to succeed. Has it missed the boat?

Thanks to the Russian invastion of Ukraine, energy prices in Europe are rocketing. Between January and August wholesale prices per MWh have increased roughly ten-fold, according to Statista. 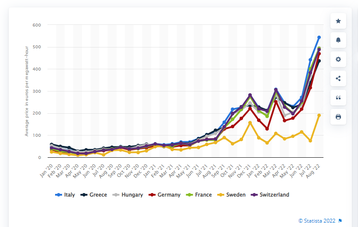 Compared to that, Iceland's energy costs around $42 per MWh, which has remained relatively unchanged.

This comes on top of a shift in which data centers have become unpopular in European countries like Ireland, Denmark and the Netherlands, becauase of their appetite for power, water and land.

Historically, we know that it takes a huge amount of change to shift capacity from historic data center hubs. The network effects of being close to existing capacity are so strong, they generally outweigh the pressures to move elsewhere - so we see effects like the way continued expansion stretches the power distribution network in Loudoun, Northern Virginia, and also in London.

But with a difference in energy prices price this striking, data center operators must be looking again at Iceland.

Another factor to consider is Iris, a cable between Iceland and Ireland, which is touted as providing 10ms latency between the two countries (and a corresponding reduction in latency to the mainland), when it opens in 2023.

The impossibility of delivering any new capacity in Dublin has driven one operator (Dataplex) under.

I could imagine deals which would enable the Irish data center sector to continue to grow, using Iceland as overflow capacity.

Operators in Dublin (or other European hubs) could offer customers a cost reduction if they shifted less latency-sensitive jobs Westward, where they will be immune to the Putin effect on electricity prices.

I have yet to hear of such a scheme, and there may be plenty of reasons why they would be difficult to implement (data protection, security, and the sheer network demand of pumping whole workloads from one country to the next).

But I think the current situation could produce sufficient incentives to make something like that work.