Investment is faster than ever, and it's FLAD not FLAP, says Knight Frank and DC Byte

Europe will have four "Gigawatt markets" for data centers, and Paris won't be one of them, as data center investment in Europe continues to accelerate at unprecedented levels, according to the first data center report from global property adviser Knight Frank.

All of Europe's data center markets are growing, but Dublin has overtaken Paris, joining the cities of Frankfurt, London, and Amsterdam, all of which are expected to exceed 1000MW (1GW) of data center capacity before 2023, according to the first Knight Frank Data Centre Report, put together by market analytics firm DC Byte. Investment is continuing strongly, with over $25 billion of total data center investment expected to complete in 2020, and a higher take-up than the first half or 2019, according to DC Byte. 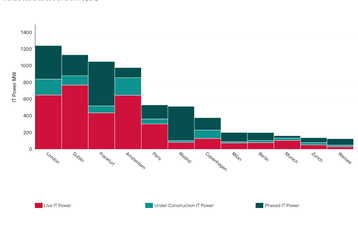 "The period of M&A activity under Covid-19 [has been] one of the busiest periods in data center history, with over $25 billion of total data center investment expected to complete in 2020," says the report, listing completion of Digital Realty's $8.4 billion purchase of Interxion, and EQT investment partners buying Zayo for $14.3bn and Edgeconnex for a rumored $2.5bn.

Investment in the first half of 2020 was over four times the annual average figure, and "a colossal increase on last year’s $2 billion investment volumes," says the report. Take-up in H1 2020 was also 50 percent higher year-on-year at 282MW.

The report looks at enterprise and colocation data centers as an asset class, in twelve key European markets. It combines the number of MW of live data center power in each market with the amount under construction, along with "phased" constructions - meaning data centers which are in the pipeline, having been paid for in advance by the customer. "Phased IT power means a committed development," explained DC Byte CEO Ed Galvin to DCD. "You have a field with planning consent and you have signed it to Google." DC Byte doesn't include speculative construction being built for sale to a third party.

According to DC Byte's graph of the twelve hubs, the front four are jostling for position. It looks as if Dublin is currently ahead of the rest of the FLAD, with 769MW of live power, but London has nearly 600MW phased or under construction - enough to take it back to the top spot. Frankfurt is smallest of the top four, with "only" 437MW of live space, but an astonishing 531MW of phased power puts it back ahead of Amsterdam - where a recent moratorium means there's only 211MW under construction, and 120MW phased.

Paris is traditionally seen as a leader, but has a total of around 530MW, comfortably behind the FLAD on DC Byte's figures. Madrid is snapping at its heels, with more than 400MW of phased power to add to its current 82MW. "Madrid, Copenhagen, and Warsaw have emerged as the fastest-growing European markets [in percentage terms] with over 700MW of enterprise hyperscale and build-to-suit developments between them in planning or active development," says the announcement.

A large part of Spain's increase comes from a huge development of more than 300MW by Amazon, Galvin told us, adding that Copenhagen has developments from Google, Facebook, and Apple, while non-traditional hubs including Warsaw and Milan are likely to expand fast.

The iconoclastic report should attract attention to Knight Frank and DC Byte. Knight Frank has launched the report along with a new global data center practice, led in Europe by Stephen Beard, a director at CBRE until May this year. “There are often a lot of assumptions made in the market, typically based on how countries have delivered in the data center sector in the past," said Beard. "A number of these new findings will challenge that thinking. We predict that the sector will only continue to grow in importance, particularly given the increased remote working and digitization of companies as a result of the Covid-19 pandemic.”

For its part, DC Byte is a market intelligence firm set up over the last couple of years by Galvin, who also used to be at CBRE. The company's public site gives a glimpse of a subscription service that has access to granular customizable data on all European markets, which Galvin plans to increase to cover the rest of the world.

"Data centers are a tall industry, not a wide one," said Galvin, meaning that there's a lot of money concentrated in a small area and a small group of people. It also means there should be demand for good analytics: "This information can be in a daybook, but get stuck in a drawer. We've built something where data is added and compared with other data sets."

On the new report, Galvin said: “The technology giants are increasingly self-building which has the potential to rapidly change the data center landscape as they move away from the short-term flexibility of the colocation model. At the same time, build-to-suit is becoming more prevalent as colocation operators tap into hyperscale demand."

For comparison, CBRE said in a recent report that, in the second quarter of 2020, London’s data center market had a total supply of 711MW, and expects it to have 67MW more capacity by the end of the year than it did a year before.