The pandemic has not slowed expansion in Frankfurt, London, Amsterdam, and Paris

European data centers are on track for another record year, despite the ongoing Covid-19 pandemic. 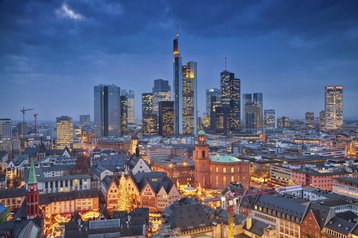 "The data center sector is one of the best protected in the current downturn," Mitul Patel, head of EMEA data center research, said.

But Q1 was still "unusually quiet for cloud companies," Patel said, and - with the hyperscalers responsible for 80 percent of take-up across the FLAP markets - "the total take-up for Q1 was therefore relatively modest, at 26MW." Still, "there is no doubting the appetite of the cloud service providers for new data center infrastructure in Europe," he added.

Interestingly, in its report, CBRE did not believe that Covid-19 was directly responsible for the slower quarter, but rather that a large proportion of this year's take-up is already pre-let in facilities that are currently being developed and so have not entered CBRE's statistics from a supply or take-up perspective yet.

"The scale of their individual commitments is increasing and this is resulting in a growth in the number of single-tenant facilities. In the most active markets, London and Frankfurt, these companies are increasingly looking to lease whole buildings of over 20MW. As a result, the number of facilities leased entirely by single-tenants in 2020 is expected to reach nine, compared to four in 2019 and one in 2018."

CBRE knows of at least 138MW of further capacity that has already been committed to or is under option in the FLAP markets for the rest of the year. Add in additional deals that are likely to come to market in the next three quarters, and there's a strong chance that FLAP markets will reach 200MW for the second consecutive year.

"Possibly one of the most significant challenges in the current environment involves the construction of new facilities and fit-out of data halls for new tenants," Patel said. "Market take-up is dependent [on] the development of these facilities to house new end-user requirements, so minimizing any delays to construction programs will be important to overall success.

"As things stand, most companies are continuing with construction and plan to continue to do so as long as it is legal, practically possible, and safe. Developer-operators are confident that delays will be minimized and that there will therefore not be a significant disruption to existing development pipelines."

The FLAP markets now total 1,699MW of capacity, having added 30MW in Q1 2020. Frankfurt and Amsterdam were responsible for over 95 percent of the new supply that quarter - both primarily from expansions to existing campuses.

Vacancy rates across the FLAP market are around 21.6 percent, with Amsterdam having one of the highest rates at 25 percent. Paris, meanwhile, dropped to 12 percent, its lowest in four years.

With upcoming large deployments, CBRE believes it is unlikely that any of these vacancy rates will become critical - although the company notes that Covid-19 supply chain disruptions are hard to predict.

Frankfurt is the market with the highest risk of suffering if there are any construction or supply chain issues, as it remains the top performing market in Europe.

London remains strong, and is on track to total 800MW this year - double what it was just four years ago. But perennial data center hotspots Slough and Stockley Park are filling up, so hyperscale companies may begin to look elsewhere - such as NTT's Dagenham data center.

Amsterdam is still seeing growth in Schiphol, but space for new development is limited. Two municipalities have put a moratorium on new developments, but CBRE believes that could be lifted - with some restrictions - but year's end.

Paris is expected to really shine next year, with more regular 5MW+ single-let or build-to-suit facilities set for 2021. Currently, it has some large cloud deals in the works.

Cloud procurement trends have also changed, increasingly shifting to large companies acquiring whole single facilities capable of 15MW+ capacity in one go. Typically, they will commit either to half a building (facilities under 20MW), or a third (facilities over 20MW) on day-one, with the option for the rest to be drawn down in the coming years.