Microsoft has bought a parcel of largely undeveloped land in San Jose.

The company acquired around 21 acres in San Jose for $78 million on the corner of Orchard Parkway and Component Drive. The site is located directly south of automotive lighting company Lumileds' headquarters on West Trimble Road. 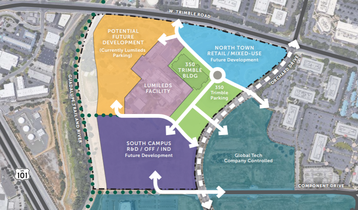 LBA Realty's previous plans for the land under its 'Northtown' project: Microsoft has bought the majority of what would have been the 'south campus' – LBA Realty

The land was purchased from LBA Realty, which had proposed building a mixed-use village of offices, hotel rooms, and retail uses. The site currently contains a mix of vacant undeveloped land and some buildings.

Though it declined to comment, Mercury News reports the company is planning to build a data center on the site.

Microsoft recently said it is tracking to build 50 to 100 new data centers per year for the next few years. In recent months its has bought multiple large plots of land in Georgia, has developments in Washington and Iowa, and filed applications for more data centers in Texas and on its Irish campus outside Dublin.