The tech giant is working very closely with the Indian Government

The funds will be invested over the next five to seven years. 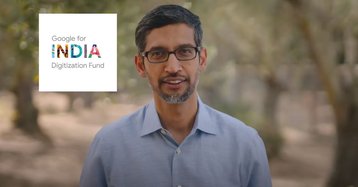 Pichai announced the fund in a video message as part of its #Google for India 2020 digital event. In the video, he is joined by Sanjay Gupta, the country manager and VP of Google India, and several Indian politicians.

"Through this effort, we will invest ₹75,000 crore, or approximately $10bn, into India over the next five-seven years. We’ll do this through a mix of equity investments, partnerships, and operational, infrastructure, and ecosystem investments. This is a reflection of our confidence in the future of India and its digital economy.

"As we make these investments, we look forward to working alongside Prime Minister Modi and the Indian government, as well as Indian businesses of all sizes to realize our shared vision for a Digital India."

Digital India is a campaign launched by the Indian Government, initially to ensure public services were accessible to its citizens online.

The campaign has called to improve the country's online infrastructure and increase Internet connectivity, with people in remote areas given cheaper data plans or interconnectivity solutions in rural areas. The program was launched by the Indian PM Narendra Modi in 2015.

Despite the many millions who lack basic online access, India is still home to one of the largest populations of Internet users. But, due to the proposed Personal Data Protection Bill, Indian user data may well have to be located in-country.

This has spurred a number of large US tech firms to locate data centers in the country where 1.3 billion people live and work.

Amazon recently pumped $1.6bn into building two data centers near the city of Hyderabad and entered talks to invest around $2bn into Indian mobile operator Bharti Airtel for a five percent stake. Rival Microsoft in 2019 announced a major partnership with Reliance Jio to build data centers across the country.

In April, Google announced it was planning a $400m submarine cable that will link India and Italy, via Israel in 2022. The tech giant was also reportedly interested in buying a stake in Reliance Jio.

The company currently operates three data centers in its asia-south1 cloud region in Mumbai, and earlier this year announced plans to open in Delhi.

Pichai's $10bn promise made no explicit mention of data centers, but did include infrastructure investment.