Company continues expansion spree across the US

Facebook has announced it is expanding its data center campus in Altoona, Iowa.

The social media and advertising company is adding two more buildings that will make the campus a total of ten buildings and more than 4.1 million square feet (380,900 sqm). 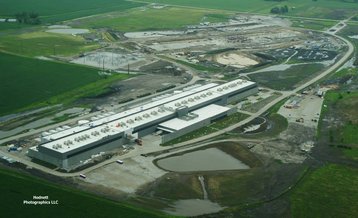 Building nine will be a standard operational data center, while No.10 will be constructed for cold storage, Facebook's Melanie Roe told the Des Moines Register. The company is also reportedly paying $500,000 for a pump station that will boost the water pressure for the data center and surrounding area.

The company first announced the Facebook Altoona Data Center in 2014, and has added a steady stream of data centers to the original 476,000 sq ft (44,200 sqm) campus.

“Construction is ongoing on the expansion we announced in 2019 which means crews will be able to roll straight into this new expansion. We anticipate construction will continue through 2023,” Facebook said in a statement.

The social network has been on a massive expansion spree in 2021; the company has announced a total of 10 other new data centers at its Papillion, Prineville, Los Lunas, Huntsville, and Eagle Mountain campuses, totaling more than 5 million sq ft (464,500 sq m) of new space to its facilities.

The company is also thought to be expanding into new locations across the US.

Last month the company also announced that, as of 2020, Facebook’s operations were supported by 100 percent renewable energy and the company has reached net zero emissions. The company says it has contracts in place for more than 6GW of wind and solar energy across 18 states and five countries, with all 63 projects located on the same electrical grids as the data centers they support.