Compass Data Centers has been confirmed as one of the data center firms involved in the controversial Prince William Digital Gateway Project in Virginia.

The PW Digital Gateway plan would see more than 2,000 acres of land in Prince William County earmarked for data centers, with approval paving the way for more than 27 million square feet of development. QTS was known to be involved, and now Compass has revealed its plans for the area. 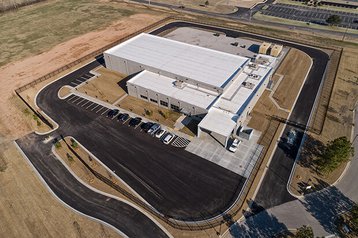 First reported by InsideNova, Compass Data Centers has filed an application to Prince William County asking to rezone 824.9 acres across 103 properties along Pageland Lane, including the home of Gainesville Supervisor Pete Candland. The company wants to build 10.52 million square feet of data centers by 2030.

Within Virginia, Compass currently operates one campus in Leesburg, Loudoun County; originally granted permission for a 75MW, 750,000 sq ft (~69,700 sqm) site spanning nine buildings and beginning construction on the first in 2019, the company recently downsized its master plan to 625,000 sq ft (68,000 sqm) after removing plans for two buildings and gaining the option to group three of the buildings into one large facility.

The new application – which is requesting to rezone the properties along Pageland from agricultural and semi-rural residential zoning to planned business district – says the area is suitable for data centers because “it sits either under or adjacent to existing high-voltage electric transmission lines, and fiber optic corridors, that are critical to data center operations.”

Reports of a PW Digital Gateway surfaced last year. Originally reports had the development billed as a proposal for an 800-acre development; the proposal aimed to string together 30 parcels of agricultural land owned by 15 property owners to be developed by a single unnamed data center developer, later revealed as QTS. Despite protests outside its nearby data center, the company filed its own rezoning request in March; the company hopes to develop 7.9 million square feet of data centers on 812 acres.

Prince William Times had previously reported that Compass was rumored to be interested in acquiring some of the land in the project, but the company had never confirmed this.

Both applications are in the county’s quality control process, during which county staff verifies that all submission requirements are met before formally accepting the application.

The projects combine to cover 1,636 acres and 18.42 million square feet of data centers, meaning another ~500 acres/9 million sq ft of data centers have yet to be publicly claimed. Previous reports suggest ‘half a dozen’ developers were interested in the original 800-acre proposal, so the land may already be earmarked by one or several companies.

The proposals have drawn sharp rebuke from local residents and officials, who have voiced concerns over inviting large amounts of new development to a mostly rural area and worry about the potential impact the rezoning could have on the nearby Manassas National Battlefield and other local historical sites as well as the local water table and rural nature of the area.

In the latest issue of DCD Magazine, we look at the Gateway project, the long history of resistance to development in Prince William County, and spoke to the Coalition to Protect PWC's director Elena Schlossberg about the spread of data centers from Loudoun into PWC and the impact the gateway proposal is having locally. Download and read it for free here.