Ukraine: Internet disruptions for ISPs Volia and Skyline in Kherson and Kharkiv

Outages continue to get worse as Russia's invasion drags on

Internet services have been heavily impacted in the Ukrainian cities of Kherson and Kharkiv due to Russia's unprovoked invasion. 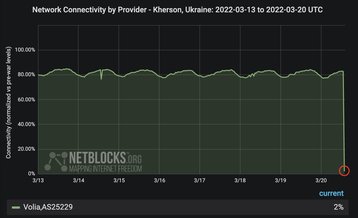 "A collapse of connectivity has been observed on Internet provider Skyline in Kharkiv, Ukraine; the company says that the server which issues IP addresses is down due to a power cut, and subscribers should not restart devices," Internet outage tracker NetBlocks said.

Kharkiv, in northeast Ukraine, has been under constant bombardment since the beginning of the conflict, nearly a month ago.

The port city of Kherson was one of the first to fall to Russian forces, but fighting continues as residents protest the illegal occupation.

Earlier this month, a cyberattack on ISP Triolan caused an outage lasting more than 12 hours, while Ukraine's national telecoms operator, Ukrtelecom, went down for 40m in a nationwide outage.

Russian attacks on cities have also impacted connectivity as infrastructure has been damaged in Severodonetsk, Sumy Oblast, and Kyiv.