Ukraine: Connectivity at Internet provider Uacity disrupted amid reports of shelling near HQ in Kyiv

ISP Uacity was brought offline due to Russian shelling, while Internet provider LocalNet, said that it was struggling to pay its bills. 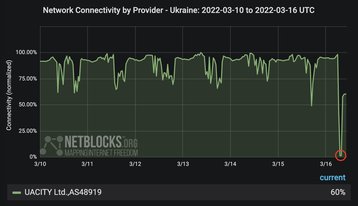 The tracker added: "Metrics show a sudden drop in connectivity levels on Internet provider LocalNet, Ukraine. Yesterday, the operator said it would 'lock down subscribers with debt on their account' due to difficulty paying its own bills."

Last week, a cyber attack on ISP Triolan caused an outage lasting more than 12 hours, while Ukraine's national telecoms operator, Ukrtelecom, went down for 40m in a nationwide outage.

Russian attacks on cities have also impacted connectivity as infrastructure has been damaged in Kherson Oblast, Severodonetsk, and Sumy Oblast.