Severe Internet disruption has been reported in Severodonetsk, the acting administrative center of Luhansk Oblast, in Eastern Ukraine.

The city (also known as Sievierodonetsk or Siverskodonetsk) is under heavy artillery fire as Russian forces advance. 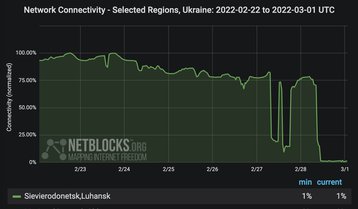 Shelling here and elsewhere in Ukraine has been referred to war crimes investigators.

"It was established that on February 28, 2022, Russian Armed Forces shelled the city of Severodonetsk, Luhansk region, as a result of which one local resident was killed, three civilians were seriously injured and … residential buildings were damaged, as well as a gas pipeline and a civilian vehicle," the Luhansk regional prosecutor's office said on Telegram, as it launched a war crimes investigation.

The Luhansk Military-Civil Regional Administration also claim that a regional orphanage was destroyed by shelling, but said that children and staff had already been evacuated.

Unconfirmed reports claim that the attacks were primarily focused on key infrastructure facilities, as well as residential buildings. It is not known if the Internet outages were the result of intentional attacks on telecoms infrastructure, or collateral damage.

"Friends and family report no contact with loved ones in recent hours," Internet outage tracker NetBlocks said, showing that connectivity had rapidly fallen from around 76 percent to 1-2 percent.

Fixed-line Internet appears to be completely gone, but some limited mobile connectivity remains.

Over the weekend, as the conflict grew closer to Kyiv, a major disruption was registered to backbone Internet provider GigaTrans. Some services have returned, but it is intermittent.