Internet and other telecommunications services have been significantly disrupted in the Kherson region of southern Ukraine.

Just north of Crimea, the 28,461 sq km oblast (province) has mostly been taken over by Russian forces. The city of Kherson appears to be the first Ukrainian city to have fallen to Russian troops, with reports of curfews and fears of mass executions. 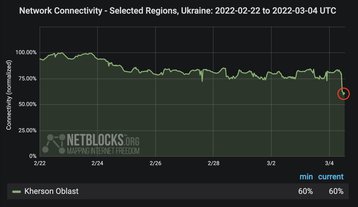 "A significant telecoms disruption has been registered in Kherson Oblast, southern Ukraine, cutting off many residents from the Internet," Internet outage tracking group NetBlocks said. "Fixed-line and mobile networks are affected at the present time."

The port town of Mariupol in neighboring Donetsk has suffered from days of continuous shelling, which has also degraded connectivity. Should it fall, along with more of the Kherson Oblast, it will allow the invading forces to link Russia with their occupied territories in Donetsk and Luhansk and Crimea, which it has controlled through separatists since 2014.

It will also separate Ukraine from the sea, and give Russia control over the region's water supplies.

The Kherson Oblast is considered the 'fruit basket' of the country, and is the main source of vegetables for Ukraine.

The wider war is expected to lead to food shortages not just in Ukraine, but also across the Middle East and Africa as wheat production is impacted.