Ukraine: Mariupol Internet goes dark as power is cut off and city comes under siege

A humanitarian crisis as Russia blocks civilians from leaving the warzone

Internet services in Mariupol have degraded considerably as the Ukrainian city comes under prolonged attack by Russian forces. 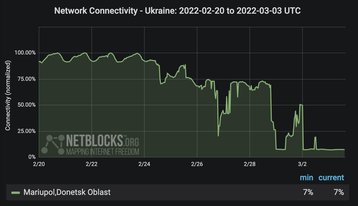 "We have been shelled constantly for the past 20 hours,” Pyotr Andriushchenko, an aide to the mayor, told the Financial Times. “For two days now we have been without heat, electricity and water.”

A frontline city that held out against pro-Russian separatists in Donetsk and Luhansk over the past eight years, "it’s a symbol of Ukrainian resistance, that’s why they just want to turn it into a heap of ashes,” Andriushchenko said.

“This isn’t a military operation — they’re trying to wipe this city off the face of the earth.”

The port city of 400,000 is under continuous shelling, and civilians have not been allowed to leave. Its 15 main power lines are down, and water connections have been cut off.

Due to the power cuts and attacks on infrastructure, Internet connectivity has also collapsed, data from outage tracker NetBlocks shows (pictured).

Other cities in Ukraine are experiencing degraded Internet connectivity due to attacks on telecoms and infrastructure and power supplies.