The largest Internet outage yet during the Russian invasion

A major telecommunications blackout has been reported in the north-eastern region of Ukraine, Sumy Oblast.

The loss of Internet connectivity comes as the region's power has been brought offline and locals report "massive blasts" at the thermal power plant. 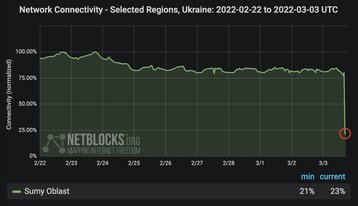 Internet outage tracking organization NetBlocks said: "A telecoms blackout has just been registered across Sumy Oblast, north-eastern Ukraine, as residents report massive blasts at the thermal power plant and electrical substation that turned the sky 'yellow and red' for miles."

Power Outage, a group that monitors electrical outages, also confirmed that it was "no longer getting power outage data" following reports of the blast.

The telecommunications outage is the most serious since Russia began its invasion of Ukraine - impacting the largest area, and being the most severe.

Previous outages have hit individual cities, and some services have remained. The city of Mariupol saw its Internet degrade in stages, while Sumy Oblast's was a sudden single discreet event

“This is the largest regional telecoms blackout that we’ve tracked since the beginning of the conflict,” Alp Toker, director at NetBlocks, told VentureBeat.

Sumy Oblast covers 23,834 square kilometers, and had roughly a million residents prior to the invasion.

Close to the border, it was one of the first regions invaded by Russian forces and has seen heavy fighting since the war began.