Ukraine: hackers took Ukrtelecom down by stealing credentials from employee in Russian-occupied zone

But the employee is now safe

A major outage at a Ukrainian Internet service provider was caused by a cyberattack, with hackers using the compromised credentials of an employee in Russian-controlled territory.

Ukrtelecom PJSC was hit by a roughly 15-hour outage in late March, one of the worst nationwide Internet disruptions since Russia's invasion began. 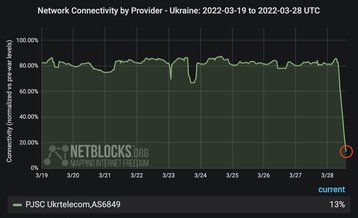 Kirill Goncharuk, Ukrtelecom’s chief information officer, told reporters that hackers were able to gain access to the ISP's network after compromising user credentials from an employee in a territory recently occupied by Russia.

Goncharuk did not give details of the territory or the employee for security reasons. But he did disclose that the person is now safe.

The attack has not been attributed to a specific hacker group, but is being investigated by Ukraine, Microsoft, Cisco, and others.

Ukraine's monopolist telephone company, Ukrtelecom is the country's biggest provider of fixed Internet in terms of geographical coverage, but comes after Kyivstar in terms of number of users.

Russia's unprovoked invasion has also damaged around 10 percent of Turkcell's infrastructure in Ukraine, and impacted telecoms infrastructure in Severodonetsk, Sumy Oblast, and Kyiv. ISPs Uacity, Volia, and Skyline have all seen services degrade as a result of the war.