Company partners with Energy Habor Corp again for an initial 200MW, could expand to 900MW

Blockchain company Standard Power is to build a massive data center at a nuclear power plant in Pennsylvania. 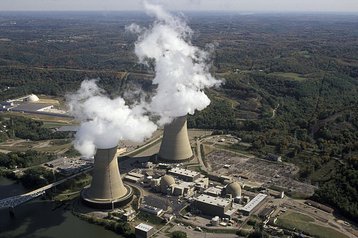 Under the terms of the agreement, the partnership will complete the required feasibility analysis to determine optimal engineering, colocation, and implementation for a new data center.

In phase 1, Standard Power will commit to a 10-year agreement to purchase between 200-300MW of electricity and capacity through a direct connection to the Beaver Valley nuclear facility at a fixed price.

Phase 1 of development is expected to come online in 2023 and 2024, with the opportunity to scale development up to 900MWs in subsequent phases.

"We appreciate the opportunity to build upon our strong relationship with Standard Power through this industry-transforming transaction. This effort is an important step in the transformation of the regions around our nuclear plants into Clean Energy Centers (CECs) that will be the necessary 24/7 carbon-free, infrastructure backbone of the US economy,” said Energy Harbor's chief operating officer and chief Nuclear officer, David Hamilton.

Maxim Serezhin, Standard Power's CEO, added: "Data infrastructure and the associated technology is energy-intensive, and we recognize our responsibility to build a more environmentally sustainable future. Expanding our relationship with Energy Harbor strategically enables us to proactively structure our hosting capabilities to ensure that 100 percent of the power associated with this facility is carbon-free.”

Energy Harbor Corp., previously First Energy Solutions, operates a number of coal and nuclear power plants across Ohio, Pennsylvania, and West Virginia. Earlier this year the company announced plans to shut and/or sell a number of coal plants as it looks to exit the fossil business and focus on nuclear power.

"This agreement and projects like the clean hydrogen pilot at our Davis-Besse Nuclear Station, demonstrate that clean energy infrastructure development near our nuclear facilities will create additional jobs and economic growth for our local communities. We look forward to the culmination of these efforts as we pursue Clean Energy Center (CEC) projects at our nuclear facilities in Ohio and Pennsylvania," said Energy Harbor president and CEO, John Judge.

The two companies previously formed an agreement to power Standard Power’s Ohio crypto-mining facility in Coshocton with nuclear energy from one of Energy Habor’s plants. Standard Power has partnered with LiquidStack to deploy its two-phase immersion cooling system in the facility.

A number of companies are looking at developing cryptomine/blockchain data centers colocated at energy plants, putting the mining operations 'behind the meter' to reduce energy costs. While many have been at fossil fuel-based plants, a number are also due to be located at nuclear facilities.

Last year US power company Talen Energy told DCD it was planning to develop a 300MW nuclear-powered cryptomining facility and data center adjacent to its nuclear power plant in Pennsylvania.

A 2-3GW crypto-mining farm is also being planned on the site of the Rivne Nuclear Power Plant in Ukraine. Construction was expected to be completed by August 2022, but Russia’s invasion of Ukraine has likely put those plans on hold.

In 2019, Rostelecom Data Centres opened a facility on the grounds of the Kalininskaya Nuclear Power Plant.

Traditional cloud and colocation facilities could soon also be powered by nuclear energy. Several companies are exploring the development of smaller modular reactors (known as or SMRs) that could be located close to data center campuses. Uptime also predicts nuclear power could soon be included in power purchase agreements (PPAs).