France's OVHcloud has formally confirmed its intention to go public on the Euronext stock exchange in Paris.

The news came in an announcement from OVHcloud on Monday 14 June. The flotation will happen before the end of the year, the date is not yet finalized but is in the hands of Euronext. OVHcloud has not said how much it expects to raise, but has confirmed to DCD that the family of the founder Octave Klaba will retain majority control of the company. 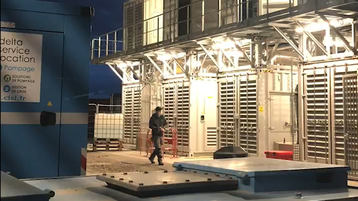 OVHcloud was founded in 1999, and is Europe's only large "vertically integrated" cloud player, constructing its own racks and servers much like the cloud giants Amazon and Microsoft Google, using its own techniques such as liquid cooling. Its revenues have grown at an average of 20 percent over the last ten years. It now has 30 data centers around the world - and is completely owned by the family of founder Octave Klaba.

The company first started the process to have an IPO in early March, days before a disastrous fire which destroyed its SBG2 data center in Strasbourg, and disabled another facility on the same site.

Since March, the company has maintained that the IPO will go ahead, even while it has gone through the process of restoring customer servers and data where possible, and has promised to set up a fire safety laboratory. The final report on the cause of that fire will not be published until 2022, after the IPO has taken place - a delay which OVHcloud says is due to the involvement of authorities including the French government, and insurers. Ahead of the fire, a separate inspection of OVH's Roubaix data center found that it lacked sufficient fireproofing in its battery rooms.

The IPO is needed to enable OVHcloud to continue to develop and grow within a market which will be growing even more rapidly - and apparently includes a strong focus on Europe, where there is increasing pressure to address privacy concerns by storing data locally.

"We could keep on growing like we have been, but the whole momentum around data sovereignty is a deep wave," an OVHcloud spokesperson told DCD. "The market for cloud in Europe is expected to overtake telco by 2030."

In the press release, CEO Michel Paulin said the move would allow OVHcloud to finance new data centers, and to enter new geographical areas, as well as offering new service, pointing out that the market is expected to "double-digit growth for at least five, ten or fifteen years.”

Although Octave Klaba is expected to profit from the IPO, none of the funds raised will be put into Klaba's other venture, the gaming company Shadow, according to OVHcloud: "Octave is now a VC. He took over [Shadow] because the company was in a bad shape. His ambition is to invest in the upper layers, including education and training. He wants to maybe link it with a bigger project, because Octave is a visionary."