Days before a serious fire in Strasbourg

OVHcloud has launched the process for a public offering (IPO) on the Paris stock exchange. The announcement came on Monday, two days before a fire destroyed one of the company's 32 global data centers in Strasbourg.

If completed, the IPO could be France's biggest tech transaction of the year, according to the report on Reuters. The company is a public cloud operator, competing with the likes of Amazon Web Services and Microsoft Azure, with a substantial international business, likely to be bolstered by European privacy concerns. 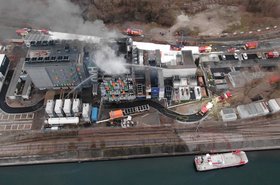 OVHcloud's position in Europe has given it partnerships with services companies in the region including Deutsche Telekom, Atos, and Capgemini. The IPO could provide funding to strengthen its hand against AWS, Azure, and Google, as well as players such as Alibaba, Tencent, and Rackspace.

It would also change the company's direction; it is currently 80 percent owned by the family of the founder, Octave Klaba, although it shifted leadership in 2018 with the appointment of Michel Paulin, a telecoms executive from operator SFR, as CEO along with data center chief Francois Sterin joining from Google.

The company constructs its own hardware in liquid-cooled racks, which it ships to its data centers. Its buildings are mostly re-purposed warehouses, occupied gradually, a practice that allows lower embodied energy and a smaller carbon footprint. It is not known whether either of these was a factor in the fire in Strasbourg, which destroyed one data center and damaged a second one this week.