In a world dominated by US and Chinese providers, does the world need a European cloud player to preserve privacy? OVHcloud’s CEO, Michel Paulin, talks to DCD

OVHcloud is the only global cloud provider based in Europe, and that simple fact is guiding its next steps, says the CEO, Michel Paulin. The company backs open standards and choice, and it champions European privacy measures against the state-based intervention of the US and China. He believes the world needs a European alternative to interventionist states and the AWS monopoly.

The company is not well known outside France, but turned 20 this year. The OVH hosting business was founded in 1999 by Polish-born entrepreneur Octave Klaba. It is still often seen as a web hoster, but has a thriving public cloud, and hosted private cloud business, served from 30 data centers on four continents (in the US, Canada, Singapore, Australia, and five European countries). 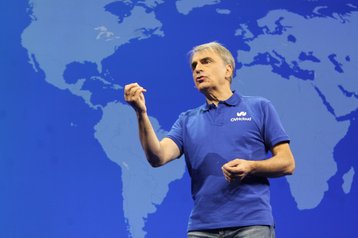 In 2018, Klaba appointed Paulin as CEO, and at this year’s annual OVH Summit in Paris, the company announced a new name: OVHcloud. “It's a way to demonstrate to a market where we are not well known, that we are a cloud provider,” he told us at the summit. “And we are not to be perceived as a small web hosting company any more.”

The new name and new CEO may underline the company’s message, but there’s no major change in direction. Paulin comes to the cloud from a different sector: in the telecoms world, he managed the IPO of Neuf Cegetel and its merger with the telco SFR, later becoming SFR’s CEO. But he’s not there to change things.

Paulin is adapting to OVHcloud’s world, rather than the other way round, and says the cloud is different to telecoms: “There’s much less regulation. And it is very, very new technology.”

Telecoms is slower, he says: “Even 5G uses IP technology, and fiber is nearly 50 years old. We're not talking about pure software like Kubernetes, and Hadoop servers. Telecoms took 15 years to go from GSM to 2G. In the cloud the rhythm is days, or weeks.”

Klaba remains as chairman of the board, and the two have daily discussions: “Octave has a vision, and we are trying to execute as fast as we can.” Klaba’s role as a visionary - a “geek in a good way” - is clearly important. 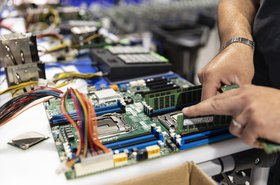 You might expect the physical design of data center hardware to be pretty standard by now. Don’t be so sure…

The Summit is designed to demonstrate OVHcloud’s status and continuity with OVH. Three thousand delegates (and maybe a few thousand more over the web) enjoy a keynote bristling with senior speakers. The French Digital Economy Minister Cédric O says business needs a European cloud, vice-admiral Arnaud Coustilliere from the Ministry of Defence says everyone needs private data. They are joined by senior executives from Capgemini and Deloitte - and finally, in an OVH tradition, Klaba performs a musical number with two friends.

At the Summit, Paulin tells us his mission is to broaden the company’s appeal, and raise the profile of its cloud services, countering the widespread perception that it is primarily a hoster, and increasing awareness of what it’s actually doing.

“We are sometimes a ‘best kept secret,’” Paulin says. Not everyone knows that 70 percent of OVHcloud’s business comes from the cloud, he says. “Of the world’s top ten cloud providers, all the others are US or Chinese, and there is one Japanese operator. We are the European cloud provider with a worldwide presence.”

And that cloud business is diverse. OVHcloud aims to offer an alternative to AWS and the other giants, and Paulin says it’s always had a more mature vision of the reality of cloud. “We do PaaS (platform-as-a-service) and IaaS (infrastructure-as-a-service) offerings somewhat similar to the AWS behemoth, but also include bare metal, containers, and private cloud.”

Other people have overestimated the power of public cloud: “Five years ago, people expected public cloud would solve all the problems for everybody, that it would be the Holy Grail, and everything would be perfect. Octave always said no - it would work, but it would have some problems. The solution is hybrid cloud.”

Early on, OVH launched a product for hosted private cloud based on SDDC (software-defined data centers), to use alongside public cloud: “You can put the appropriate workload with the right architecture, to be sure that you have the same SLAs, the same resilience and the same latency - as if it was on your own premises.”

Like those hybrid clouds, OVHcloud’s business itself isn’t monolithic, like the offerings of big players like AWS and Azure. It needs partners: “We do need an ecosystem, and we don’t want to be monolithic. We rely on a lot of partners when our solutions go to the market. Because when you are three you can go faster than alone, and when you are 100 you can even accelerate.”

There’s one drawback to this. If the customer only sees the partner’s brand, doesn’t OVHcloud remain a “best kept secret?”

“This is something we are aware of,” says Paulin. “Some of our customers don't want to say our name,” he admits. Some PaaS and SaaS customers and hosters want to maintain the illusion that they have their own facilities. For instance, giant hoster GoDaddy is understood to be an OVH customer, but as both offer hosting, they are also competitors.

In some countries (like the UK) the majority of partners don’t promote the OVHcloud name, says Paulin: “So we are under the radar.” But in future he believes that OVHcloud’s unique approach will become something that people will actively want to share.

The company’s distinctive hardware is definitely winning customers, he says: “We don't have air-conditioning. We do water cooling. It is much more eco-friendly - for the same level of servers, we use 10-50 percent less energy than a classical data center. Our PUE [power usage effectiveness] is 1.09; the latest generation of air cooling is at 1.2 and many facilities are at 1.6.”

It also saves on building expenses. The liquid cooled racks don’t need traditional contained aisles and raised floors, so they can be installed rack by rack in ordinary warehouse space: “We don't need to have white rooms, filtering and freon. We don't have all those ugly words.” 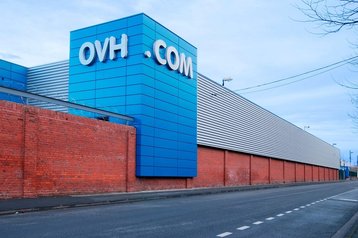 OVH hosts cloud services based on the OpenStack open source platform, and VMware’s vCloud - both of which were heavily promoted in the early 2000s, as public cloud alternatives to the AWS juggernaut. As those public cloud contenders fell by the wayside, OVHcloud remains as an exception.

The company has doubled down on that role, adding more unusual services, including a cloud service which offers Kubernetes containers implemented on bare metal servers, instead of the virtual machines (VMs) favored by other providers. This gives customers more performance, but is more of a management headache for OVHcloud, CTO Alain Fiocco explained at the same OVHcloud event.

In 2017, OVH picked up VMware’s failing public cloud effort vCloud Air, and consolidated the underlying hardware into its own data centers. This gave it a US footprint, and Octave Klaba spent the first half of 2019 living in Dallas to understand how to integrate the US-heritage business into a European organization.

Will OVHcloud have to modify its European attitudes as it becomes more international? No, says Paulin. If anything, the European DNA is even more important: “We do believe that our roots are in Europe and openness - transparency, GDPR and open source are European values.

“When we go to Asia and Australia, do we have to change these key DNA values? I don't think so,” he says. If anything, adherence to the European GDPR gives OVHcloud an edge over US-based firms that have signed the CLOUD Act.

“The CLOUD Act is a legal tool which gives access to your data if you're on Amazon, Google or Microsoft. So companies are a little bit afraid that without notice, someone can ask for access to their data.”

OVHcloud actually offers compliance with the CLOUD Act as an option, since some firms may require it. Its US subsidiary is based in the States, so it has been established as a strictly separate entity, bound by the Act.

He’s surprised that the UK has effectively signed up to the CLOUD Act with a new treaty, and amused at the US reaction to the bilateral agreement. “In the US, some organizations said 'Oh, this is a shame. We gave the right to the UK to have access to some data in the US'." This is "bizarre," he says, since that's exactly what the US has demanded from the rest of the world.

Paulin thinks there’s more opportunity in holding out an alternative: “The government in France and the European Commission asked us to think about what we need to do to protect European data. The French government doesn't want other states or jurisdictions or companies to have access without any limitation.”

“A politician in France said there's a war between GDPR and the CLOUD Act,” Paulin says. “I don't know if it's a war. But I think it is a debate.”