While customers wait for data after the SBG2 fire in Strasbourg, Klaba wants to help

Following the fire which destroyed its SBG2 data center in Strasbourg on March 10, French cloud service provider OVHcloud has promised to set up a data center fire research lab.

The company continues to work on restoring data from customer servers at the site by the Rhine on the German border. The provider abandoned efforts to restart the adjacent SBG1 data center at the weekend, after a smaller fire in a room of disconnected batteries. Public and private cloud services based on OpenCloud and VMware are being rebuilt in the coming days at the SBG3 and SBG4 facilities on the same location, OVHcloud founder Octave Klaba promised in a new video update yesterday, also issued in French.

Klaba: "Nobody wants to have this kind of incident" 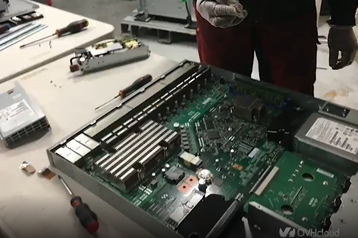 The root cause of the fire is the subject of an investigation involving police, insurance, and independent experts, said Klaba: "It will take a few months to have the conclusion and we will share it with you." Earlier, he had mentioned that UPS systems were on fire in the original blaze.

Klaba spoke of different fire prevention and suppression standards, which vary from country to country, and even within data centers, depending on whether a room holds mechanical or electronic equipment. He promised that OVHcloud would "oversecure" all its own data centers, as well as set up a laboratory to evolve standards for fire handling in data centers - whose results would be shared with the industry.

"Whatever the standard is, with Michel [Paulin, the OVHcloud CEO] we decided to over secure all our data centers," said Klaba. "But more, we decided to create a lab where I want to test and see how the fire is going in the different kind of rooms and find the best way to extinguish the fire in all the rooms. I want to share the conclusion of this lab with all the industry, because... nobody wants to have this kind of incident in their data centers."

Restarting all the servers

"On Friday we had a small incident in SBG1, we had smoke from an unused room, we decided not to restart that for the moment," said Klaba. The servers from rooms A to D are going into the SBG4 data center on the Strasbourg site, while those from Room E are going "through our Croix factory," where they will be rebuilt and racked, before shipping to different data centers in Roubaix and Gravelines.

OVHcloud's current plan is to restart SBG4 on Wednesday, with all the servers from SBG1 rooms A to D up and running by Friday.

This leaves SBG3, the largest surviving data center on site, with five floors, and 600 racks, said Klaba. Of these, 100 racks are supporting OpenStack public cloud, 100 are running VMware for hosted private cloud, and 400 are hosting bare metal instances.

"Bare metal is going very well, we are going rack by rack and restarting all the servers," said Klaba. For the OpenStack public cloud, OVHcloud has restarted a big part of PCS public cloud and predicts it will today restart all the PCI instances in SBG3.

For customers in the burnt-out SBG2 data center, who took the option of backup storage with OVHcloud, there is hope that their data may be restored shortly: "30 percent of customers who took the backup on SBG2, we have the data and we will restart all the VPS and PCI for the customers that decided to take the backup services in OVHcloud . This should be done during this week."

For the hosted private cloud based on VMware vSphere, customers must wait until the cluster is rebuilt, which has the information to manage all the virtual machines. "We are working to recreate the cluster and to restart all the VMs." Klaba hopes to get 30 percent of the vSphere private cloud customers restarted today or tomorrow. and the rest during the remainder of the week: "For some customers we need to rebuild the VMs."

Also in the video, Klaba talked about OVHcloud's liquid cooling technology. As well as in-rack cooling which circulates water over the chips in the servers, the company operates room-level liquid cooling which sends water to the racks, instead of circulating outside air, a technique known as "free cooling".

"We’d been using free cooling up to 2016. In 2016, we moved to another technique called water cooling of the rooms," said Klaba. "We don’t use free cooling any more. We will open source this and give it to the industry."

In other tweets, he explained OVHcloud's reasons for abandoning the partially-damaged SBG1 data center, and moving servers to SBG4, and to other data centers in France: "Restarting SBG1 takes too long. All other scenarios were faster." [translated from French]