Nvidia suspends all sales to Russia, joining AMD and Intel

And with TSMC also cutting business ties, Russia's access to chips is at risk

Nvidia has joined fellow chipmakers Intel and AMD and suspended all sales to Russia in the wake of the country's invasion of Ukraine.

“We are not selling into Russia."

In a short statement, Nvidia confirmed that it was no longer working in Russia, but did not clarify what this means for laptop and desktop systems makers. 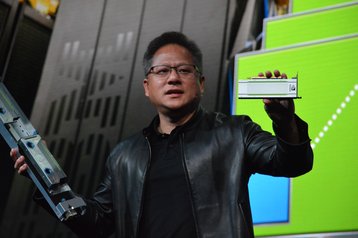 The company followed similar announcements by Intel and AMD, essentially cutting Russia off from the latest chips due to its invasion of Ukraine.

US sanctions only covered some of Nvidia's products, so the company is currently going further than it legally needed to.

Also suspending sales is Taiwanese chip manufacturer TSMC, which makes chips for Russian companies like Baikal Electronics (the Baikal processor) and is believed to build chips for MCST, Yadro, and STC Module. Ericsson, Microsoft, Oracle, Cogent, Sabre, and others have also ended business relationships in Russia.

The loss of chip sales to Russia will likely not be significant to the companies - according to the Semiconductor Industry Association, Russia counts for a fraction of a percentage point of global semiconductor sales.

Russia imports a large number of its chips from China, but they are not as advanced as those developed by TSMC or Intel. It also operates the Mikron semiconductor fab, which is only capable of a small number of 65nm process node chips.