Nokia's Bell Labs research arm is spinning off liquid cooling technology and forming a new startup which to commercialize it.

The firm has set up a new company, Accelsius, with help from specialist company creator Innventure, and will give the startup the rights to develop and commercialize "groundbreaking" technology for cooling electronics, which were developed in Nokia's historic Bell Labs. 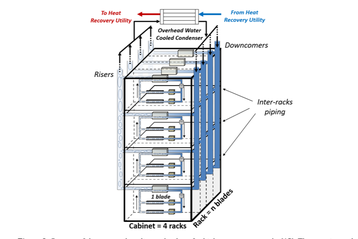 The announcement gave few details about the technology is, but the CEO of the newly-minted startup has given DCD some more details in an email.

Could it be two-phase?

The release says that Accelsius will be commercializing an energy-efficient cooling system developed at Nokia Bell Labs, which is intended for data centers and telecoms equipment, and has been in development. for more than ten years.

It is described as a passive two-stage coolant circulation system, with direct-to-chip cooling, which keeps the coolant moving without pumps. The release says it is "simple to install," and "compact," and can be adapted for a broad range of equipment and deployed at any scale, from a single server to large data centers.

"The technology offers two-phase, passive, direct to chip cooling," says Josh Claman, newly-appointed CEO of Accelsius. "The heat of the processor essentially powers the cooling loop. There are no moving parts, nothing to break, and no fluid which needs to be recycled."

Claman tells DCD that the technology has been tested in a series of "proof of concept" trials, and will be released to the market in a few months - in the fall of this year.

The details of the tests are confidential for now, but Claman says: "We are confident that not only does it offer unparalleled expense reduction in cooling vs. traditional methods, the technology allows dramatically improved densification."

The Accelsius web site is still a placeholder, but confirms that the company is offering "two phase, direct to chip passive cooling".

Previous work published by Bell Labs on cooling includes quite a lot on two-phase immersion cooling, a technique that submerges electronics in a dielectric fluid, which is allowed to boil in order to take away more heat.

A 2020 paper by Bell Labs Lead Researcher Raffaele Luca Amalfi is entitled "The Future of Data Center Cooling: Passive Two-Phase Cooling," and a number of other papers deal with two-phase cooling and thermosyphons (passive cooling systems). Notable competitors in two-phase cooling include LiquidStack, a cryptocurrency spin-off that has this week announced a successful test at NTT, that could lead to commercialization.

Other two-phase players include Zutacore, which is involved in a research project with colocation giant Equinix.

The Nokia Labs release includes a quote from Jukka Nihtila VP of patent transactions and external alliances, saying: “Our hugely versatile cooling technology can be offered to a broad range of companies in different industries to meet the challenge of heat densities in data centers and telecom networks while lowering energy consumption.”

Innventure CEO Bill Haskell says the technique has been in development for "more than a decade," and will "disrupt the cooling industry as it exists today with flexible solutions that can be widely deployed for data centers and telecom.”

In February, Nokia Bell Labs received funding from the US Department of Energy (DOE)'s Advanced Research Projects Agency-Energy (ARPA-E) for research into an efficient thermal energy architecture that will reduce cooling energy and help capture waste heat. The work will include new AI algorithms.

Claman promises to keep DCD in the loop on future developments.