NTT Data plans to adopt immersion cooling, after completing a successful test of LiquidStack's two-phase immersion systems at a data center in Japan. 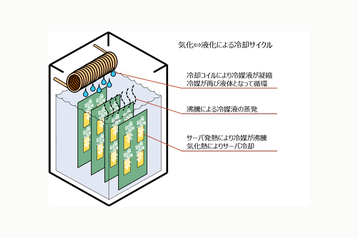 Immersion gets a roll out

NTT Data has data centers around the world, with facilities recently opened in Mumbai London, Oregon, Illinois, and California, and plans announced in Spain Arizona, Jakarta, Indonesia, and Ho Chi Minh City, Vietnam. The company plans to reduce greenhouse gas emissions by 80 percent by 2030 and be carbon neutral by 2040, and now says that 2-phase immersion cooling will be a tool to help achieve that.

The Mitaka test used two LiquidStack Data Tank units and achieved an estimated partial PUE of 1.07. NTT reached its figure of 97 percent saving on cooling energy by comparing that with a notional average PUE figure of 1.7.

The units were delivered on March 9 and operated till April 28, 2022, using a simulated load. Equipment from Mitsubishi, Dell, Cisco, Nvidia, and Intel were used, along with a low-GWP cooling fluid from 3M.

The adoption and rollout won't happen overnight. Next, NTT plans to build a dedicated immersion machine room in its data center, and use it for in-house work by the end of FY2023. At this point, the company will develop a "service model" and organize a procurement policy and maintenance system to handle the fact that immersion cooling requires different specifications and modifications.