Rittal will use HyperCool, a ZutaCore solution that uses two-phase (evaporative) cooling in racks and direct to processors, allowing individual processors to reach powers of 900W. The two companies will display their joint work at the Open Compute Project (OCP) conference in San Jose next week (Mar 4 to 5). 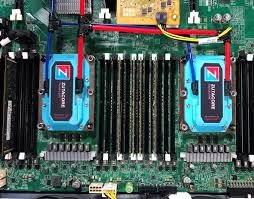 ZutaCore was founded Israel in 2016, and emerged from stealth in 2019, with a direct contact evaporative cooling (DCEC) system. Under the brand HyperCool, it's available for both OCP and Open19 standard racks, as well as a retrofit to older facilities, and a smaller-stack solution for Edge deployments.

"ZutaCore currently uses 3M's Novec 7000 fluid, which exhibits a low boiling point and relatively high vaporization energy," said 451 Research analyst Daniel Bizo in a March 2019 paper. "The process removes heat from the chip and, by way of heat rejection, the gaseous coolant then flows to a condenser, cools and becomes liquid before being pumped back again at low pressure, typically under one bar gauge."

Engineered fluids like Novec were widely used in early full immersion cooling systems from companies including the UK's Iceotope. In systems where large baths of fluid cool the systems using convection currents, such as those of GRC and Asperitas, Novec and the like have been largely replaced by cheaper mineral oils.

ZutaCore removes more heat with less of the expensive coolant because it uses a circulating pipe system in which fluid is allowed to evaporate, said Bizo in 2019: "The net effect of this low-pressure, direct-contact vaporization is high cooling capacity for a little amount of coolant, unlike in a typical full-immersion system. ZutaCore says HyperCool2 needs a mere two liters of refrigerant per one kilowatt heat load."

The global data center liquid cooling market is expected to grow at around 25 percent a year, going from $1.2 billion in 2019 to $3.2 billion by 2024, driven by high-density applications such as AI, said Rittal.

“As energy efficiency requirements increase upwards of 400W in CPUs and GPUs, it is critical that we can offer solutions that will grow with the customers in order to manage the heat, and other requirements over time,” added Dr. Thomas Steffen, director or research and development at Rittal.

“Data center owners are very interested in liquid cooling solutions as a way to manage new high-performance workloads that are disruptive to the rest of the data center environment. However, many are hesitant to introduce new technologies into their environments - especially those that introduce liquids adjacent to their mission-critical electronics," said Jennifer Cooke, IDC research director for cloud to Edge data center trends in a quote supplied by Rittal.

“This marks a major milestone for ZutaCore as we partner with a global leader in end-to-end solutions,” said Erez Freibach, ZutaCore CEO.