Cooling at 3kW per rack unit

The demo cooled Wiwynn servers designed according to the OCP's Open Accelerator Infrastructure (OAI) specifications, in a LiquidStack DataTank 4U, removing 3kW of heat per rack unit (equivalent to a density of 126kW per rack). LiquidStack says this is the first time OCP OAI servers have been optimized for cooling by liquid immersion. The demo will be repeated at SuperComputing '21 Conference in St Louis next week. 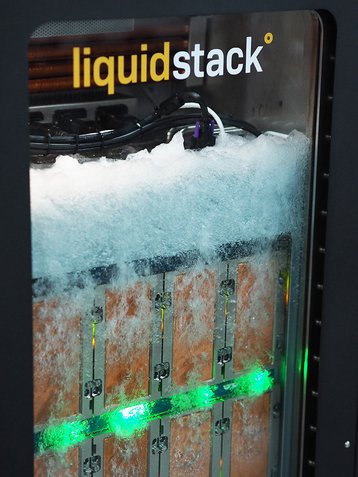 The servers in the demo featured Intel Habana Gaudi processors; cooled with a low boiling point dielectric fluid, which boils in contact with the electronics, removing heat more effectively because of the phase change. The liquid recondenses within the primary cooling circuit

LiquidStack says high-performance computing (HPC) systems are now too energy-intense to be cooled by air. Given this change, the company says HPC systems should use boards that are purpose-designed for liquid cooling, instead of adapting boards built for air-cooled systems. Compute infrastructure could be built in 60 percent less space with immersion cooling, as motherboards can be more densely packed and electronics more tightly integrated.

The system shown at OCP and SC21 should achieve a partial PUE of 1.02 to 1.03, because the system consumes no power except for the external cooling loop, which has high-efficiency dry coolers and pumps. It also consumes no water. The system is an order of magnitude more dense and efficient than air-cooled equivalents, says LiquidStack, with about 16 times the heat rejection capacity of typical air cooling.

“Through our partnership with Wiwynn, who developed the world’s first two-phase immersion-optimized servers featuring their latest OCP Accelerator Module equipped with purpose-built deep learning Habana microprocessors, we are at last unlocking the potential of high-performance computing,” said Joe Capes, CEO of LiquidStack.

“LiquidStack’s thermal management technology frees HPC from the space, efficiency, and performance constraints of air cooling and the high cost of upgrading direct to chip liquid cooling approaches with every single IT refresh. This demonstration with Wiwynn represents the leading edge of hardware now being developed specifically for two-phase immersion liquid cooling.”

LiquidStack and Wiwynn are already partners. In April, Wiwynn invested in LiquidStack, newly spun out from BitFury. Wiwynn has also tested its liquid-cooled servers at a Microsoft Azure data center in Quincy, Washington.

LiquidStack makes two-phase immersion cooling DataTanks in 2U, 4U, 8U, and 48U sizes, for facilities from micro-data centers to large-scale cloud computing sites. The product can actually cool up to 5.25kW of compute capacity per RU and can handle all industry-standard rack types and sizes, the company said.