And the tech is already on trial in Microsoft's Azure cloud

Wiwynn has given an undisclosed amount of Series A funding, and gained one seat on the board of directors of LiquidStack, and will partner to bring liquid cooled products to market. Wiwynn has shown significant interest in two-phase immersion cooling: earlier this month it announced a trial of the technique with Microsoft. Surprisingly, although Wiwynn has had a long-standing partnership with LiquidStack, this trial apparently does not use LiquidStack's tanks, but uses other tanks designed by Wiwynn and Microsoft. [An earlier draft of this story erroneously reported that Microsoft was using LiquidStack's equipment]. 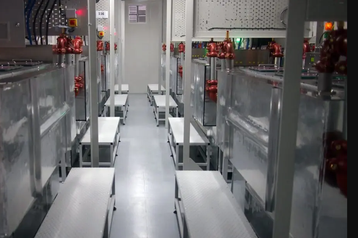 LiquidStack was founded as Allied Control in 2013, and created an advanced liquid cooling system in 2014: a 500kW data center in a shipping container, which achieved a power utilization effectiveness (PUE) of 1.02 in hot and humid Hong Kong. Company founder Kar-Wing Lau developed "two-phase immersion cooling," in which the coolant fluid is allowed to boil. This evaporation takes away much more heat than the convection-based systems which simply allow fluid to flow over the electronics.

LiquidStack uses 3M’s Novec 7000, which boils at 34°C (93°F). The Novec vapor is condensed within a sealed cabinet and drains back into the tank.

Convection-based immersion cooling players such as GRC, Submer, Asperitas, and Iceotope are currently better established in the market, but there are some other two-phase immersion outfits, including Zutacore and TMGcore, but LiquidStack claims to be the largest liquid cooling company in the world - because Allied Control was bought by Bitcoin mining company Bitfury in 2015, and has since created liquid cooling systems for purpose-built mining facilities.

This year, Bifury has spun Allied Control out, with a new name, LiquidStack, and a new CEO, Joe Capes, formerly from Schneider Electric.

Bitfury is still the majority shareholder of LiquidStack, but Wiwynn will use LiquidStack technology in various projects., as well as helping get it to market as a product. Microsoft is working with LiquidStack and Wiwynn for testing and trials at its facilities in Washington.