Microsoft has demonstrated a 3MW power generation system powered by hydrogen - the latest step in its project to move towards zero-carbon backup power for data centers.

The system was built by Plug Power, and uses hydrogen fuel cells in two 40ft shipping containers in a parking lot at Plug's headquarters in Latham, New York. Microsoft has added a simulated data center load, and run it through the same acceptance tests it normally applies to diesel generators, proving that it can keep the load running when the grid power fails. 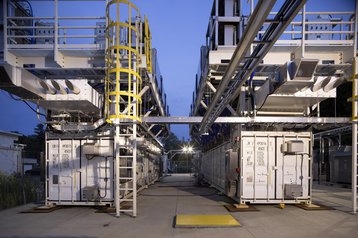 According to Microsoft, the fuel cell implementation is a potential replacement for the large diesel gensets that most data centers use to provide backup power.

“What we just witnessed was, for the data center industry, a moon landing moment,” said Sean James, Microsoft’s director of data center research, quoted in a Microsoft blog. “We have a generator that produces no emissions. It’s mind-blowing.”

Microsoft has a long-standing goal to be carbon-neutral by 2030, and even to become carbon negative, so it can cancel out its historical emissions. It has many power purchase agreements so that electricity supplied to its data centers is balanced by carbon-neutral generation on the grid, and has made moves towards matching energy hour-by-hour electricity

Backup generators are used infrequently, in tests and very rare grid outages, but are virtually all powered by diesel, producing carbon emissions. Although this is a tiny fraction of its energy use, Microsoft has promised to eliminate diesel from its backup systems by 2030.

Among the potential replacements, Microsoft has been testing vegetable oil in its Swedish data center region. It has also been working seriously with hydrogen fuel cells as an alternative backup power source for some time.

The 3MW demonstration in Latham is Microsoft's biggest hydrogen project yet. It is based on proton exchange membrane (PEM) fuel cell technology, which combines hydrogen and oxygen, producing electricity, heat, and water. This is green power - as long as the hydrogen is "green hydrogen," generated by electrolysis using renewable electricity.

In the Latham site, the power generated is fed to load banks (heaters) which simulate the power drawn by a whole data center. There are also batteries, just as would be included in a live UPS system to deliver the power while the fuel cells fire up.

"Once green hydrogen is available and economically viable, this type of stationary backup power could be implemented across industries, from data centers to commercial buildings and hospitals," says the Microsoft blog. 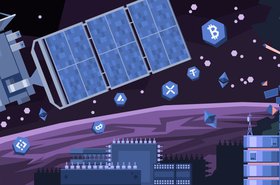 The world needs hydrogen as part of the replacement for fossil fuels - and data centers could be the catalyst for that.

Mark Monroe, Principal Engineer at Microsoft, explains how the hydrogen economy works. He shows us that hydrogen is not just a proven alternative to diesel for backup, but brings other benefits with it.

If data centers switch this small part of their energy needs to hydrogen, this could enable much larger industries to get started - and catalyze a hydrogen economy

PEM fuel cells also operate at lower temperatures than the alternative solid oxide fuel cells (SOFC) which are often powered by methane, and can start up more quickly, making them suitable for backup power. Microsoft has also previously tested SOFCs between 2013 and 2018, but shifted to PEM and even demonstrated a 250kW PEM system as a primary source for 10 racks of servers in a 48-hour test in 2020.

Microsoft turned to Latham-based Plug Power to scale up from 250kW to 3MW. Plug scaled up to make fuel cells capable of 125kW, its largest ever, and combined them in the containers to produce the 3MW system, which is the largest Plug installation yet.

“We started looking at the projections of the costs and the availability of hydrogen and we started to really believe that this might be a solution," said Microsoft principal engineer Mark Monroe. "And, so, we built a vision. It took us from a rack to a row to a room to a data center."

Each container holds 18 of the 125kW fuel cells, so there's a safety margin to the 3MW capacity of the system.

The next step was to run the tests that proved the system can support a data center during an outage. Microsoft's James explained: "Can it perform like a diesel? A diesel engine can produce a lot of power very quickly. That’s the key. So, we’re going to start simulating a data center duty cycle and one of those is a power outage.”

Plug plans to create a commercialized version of high-power stationary fuel cell system, which will be smaller and look tidier than the parking lot testbed.

Microsoft will install the commercial version at a research data center, and work on the practicalities of using hydrogen, including supply, storage, and safety protocols. The only clue James gave to the location however is that it is likely to be "where air quality standards prohibit diesel generators". This would imply an urban area, so the hydrogen safety protocols will be particularly necessary.

“I’m going to turn around when the excitement dies down and start to ask, ‘Okay, we did one, where can I get 1,000?’” he said. “We’ve got a commitment to be completely diesel free, and that supply chain has got to be robust – we’ve got to talk about scale across the entire hydrogen industry.”

At the moment, as a prototype system, the cost per kWh of energy is much higher than for a diesel, but Microsoft and Plug believe this will come down.

That's also a goal for one of the US Department of Energy's Energy Earthshots, which hopes to cut the cost of 1kg of clean hydrogen by 80 percent in the next 10 years.

For now, the prototype system is also not really a zero-carbon backup solution, because it is not powered by "green" hydrogen from renewable-powered electrolysis. Instead, the Microsoft/Plug prototype uses hydrogen obtained as a byproduct in the chlor-alkali process used in the industrial production of chlorine and sodium hydroxide.

Microsoft describes this as "blue" hydrogen. That's a classification normally reserved, in the rainbow of hydrogen sources for low-carbon hydrogen produced by other means than electrolysis. Blue hydrogen usually means hydrogen extracted from methane, a process creating a lot of CO2 greenhouse gas - but using a carbon capture system to collect some of that CO2..

The chlor-alkali process doesn't feature widely, so Monroe told DCD that the company decided to classify it as "blue".

"Our convention is there’s only one green hydrogen: hydrogen made from electrolysis of water using renewable energy. We’ve found that easiest in discussions," said Monroe. "We consider other forms of low carbon or carbon-neutral hydrogen “blue”. There doesn't seem to be any literature on the color of hydrogen from chlor-alkali process, but it’s clearly not grey or brown, so blue fits better."

Whatever the color, Plug Power promises to play a part in bringing more green hydrogen on stream. The company also makes hydrogen electrolyzers - including a 1GW contract to provide electrolyzers for a Danish wind farm.

As well as energy, the cells provide water which drains into a water tank, with a small amount vented as steam. At a production center, Microsoft would use or recycle the water.

They also get hot, so Microsoft has a cooling system using radiator fans on top of the shipping containers. This uses electricity from the fuel cells. In a production system, this heat could also be reused.

“This is the coolest thing I’ve ever done,” Plug electrical engineer Hannah Baldwin said “I don’t know how I’m going to top this in my career."