Ordinary PPAs don't match all the energy with renewable sources

Operators should switch to new power purchase agreements (PPAs) which match green energy production with their consumption 24 hours a day, according to an energy storage body.

Data center operators are using PPAs to pay for renewable energy from solar and wind farms using PPAs, but these only produce a limited amount of decarbonization in the grid, because the utility has to supply energy when the sun and wind don't provide power - and this often comes from fossil sources. Under new 24x7 PPAs, data center operators and other businesses would pay the utility for renewable energy every hour of the day, driving the decarbonization of the grid much faster, according to a report written by McKinsey for the Long Duration Energy Council (LDES). 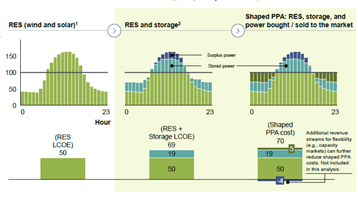 Today's PPAs are a cheat

Data center operators are the largest purchasers of PPAs, under which they directly pay to have new renewable energy production installed. In 2021 alone, Amazon, Microsoft, and Google led a surge in which more than 31GW of PPAs were bought. Amazon now has 13.9GW of PPA power, with Microsoft on 8.9GW and Google on 8GW.

However, today's PPAs have a fundamental problem. The energy generated by solar and wind farms has massive peaks and troughs, while data center operators use a steady level of power. The McKinsey report says today's PPAs often operate on a "pay-as-produced" basis, under which the customer pays for all the energy from the renewable source, but uses power from a mix of sources, including fossil fuel.

Under a pay-as-produced PPA, operators like Amazon can claim to have switched to 100 percent renewable energy, but the actual average carbon intensity of the energy they use is still around 50 percent of using a regular grid power contract, according to figures in the LDES report. For wind, the figure is a bit better, with 60 to 70 percent real carbon reduction.

If the data center operators and other consumers switched to "24x7 clean PPAs," LDES says this would pay for power producers to cut their use of fossil fuels in balancing supply and demand, accelerating their decarbonization efforts: “24x7 clean PPAs provide a form of time-matched clean power, a highly desirable commodity for corporates looking to reduce their Scope 2 greenhouse gas emissions,” the report says.

To balance intermittent renewable energy sources with constant demands from customers like data centers, utilities need storage such as large batteries and other technologies. These are still expensive and are not yet widely adopted on a large scale, so utilities have to keep running gas and coal power plants to keep data centers and other customers running.

LDES has sponsored the report to promote the idea of more long term energy storage. LDES says that measuring carbon intensity of energy consumed by the hour instead of by the year, will promote hybrid energy sources (solar and wind backed by long duration energy storage), saying: "Adoption on a large scale could eliminate the need for marginal fossil fuel plants to fill gaps in power supply created by the inherent variability of wind and solar power."

“24x7 clean power purchase agreements are integral to how we get to net zero decarbonization targets in the future, and long duration energy storage is positioned to be at the forefront of successful adoption of 24/7 clean PPAs," said LDES Council executive director Julia Souder. "There’s opportunity for hybrid renewable and storage implementation to bridge the reliability gap, leading to a more resilient and reliable clean energy future.”

The drawback is that energy storage is expensive, and 24x7 PPAs are likely to be much more expensive than pay-as-produced PPAs. There is also a lack of agreed standards, so those buying 24x7 PPAs are unlikely to get full credit, or know for sure that they are actually funding a cleaner grid.

The council hopes that more 24x7 PPAs will drive more investment and eventually bring down the cost of long term energy storage, and wants to see an independent rating organization certifying the quality of the new PPAs.

For their part, both Google and Microsoft have made commitments to move towards matching their energy use with renewable power 24x7, with Google telling BloombergNEF that it is moving on to "sourcing 24/7 carbon-free power through methods outside of PPAs.”