Swedish research institute RISE has set up a small data center in Luleå, powered by fuel cells instead of the mains. The cells also generate heat which goes into a district heating system, providing combined heat, power and compute.

The Edge data center is in the bottom of two containers, which holds a Submer liquid cooled unit, backed by a UPS. The top container holds fuel cells which run on locally produced biogas, which deliver the data center's main power, and also make heat which goes into the town's district heating system. The installation is part-funded by the EU's WEDISTRICT project, which aims to combine 100 percent renewable power sources with local heating systems. 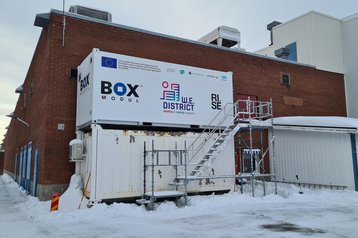 Listen on demand: DCD's panel on the E2P2 project for hydrogen fuel cells in data centers

"The WEDISTRICT demo-site in Luleå is an innovative waste heat recovery experiment," said Professor Jon Summers, research lead in data centers at RISE. "Excess heat will be recovered from the small data center in Luleå to feed into an existing local district heating network, while generated electricity power will be used for the data center itself". The data center will switch on in March and run for a whole year, to collect data for the WEDISTRICT project.

"This could be representative of an urban Edge style micro DC," Summers told DCD.

In more detail, the system uses solid oxide fuel cells (SOFCs) from German supplier SOLIDpower, which work on biogas from a local producer, Polargas. The SOFC cells, also used in systems such as Bloom boxes, operate at a high temperature around 600C, which means they produce a lot of high-quality waste heat, which can go into a district heating system run by local utility Luleå Energi

SOFC systems are suitable for primary power, as they operate efficiently, but take a long while to start up and reach their operating temperature. By contrast, PEM (proton exchange membrane) fuel cells are widely used in backup power as they work at a lower temperature and can be started up quickly. PEMs are used as backup in NorthC's Groningen 2 facility, and Microsoft has tested PEM systems in a 48-hour trial, and is starting to use PEM systems for a long term multi-MW project

"We are using the only commercially available SOFC in Europe (there are more providers of PEM) and these are around 60 percent electrically efficient, but because they operate at 650C they cannot be power cycled and their ramp in power production is poor, but they do provide a good grade of heat," Summers told DCD in an email. "So we have the data center in a container and stacked on top is the fuel cell container."

Hot enough for the district

The fuel cells powering the system will provide better quality high-temperature hot water at 95C, which is a better match for the local district heating network that operates at 72C for most of the year.

In winter, when outside temperatures are below -20C, the district heating system goes up to 110C, which makes it difficult to feed the heat in, without running extra equipment to pressurize the water, which can't be done with the commercial fuel cell heat exchangers used here.

"We believe, based on 2020 and 2021 weather data, that we can match the supply side of the district heating to work for around 8,000 hours of the year," says Summers. "We will monitor the demonstrator for a year and the data will be available as open research data in line with the EU H2020 funding requirements."

The system also has small battery-based UPS, which simply shaves the peaks and troughs in the power demand by the IT.

RISE is also involved in E2P2 (EcoEdge Prime Power), which will also be using fuel cells to provide primary power for data centers, but this is a longer-term project to develop the hydrogen fuel cell sector.