As part of an effort to get off of diesel generators

The hyperscale company previously committed to ending its dependency on using diesel fuel in back up generators by 2030, along with a broader promise to be carbon negative by that point.

A decade to get off of diesel 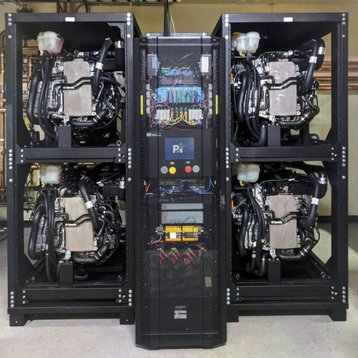 “They are expensive. And they sit around and don’t do anything for more than 99 percent of their life,” Mark Monroe, a principle infrastructure engineer on Microsoft’s team for data center advanced development, said about the diesel-fuel generators.

“We don’t use the diesel generators very much. We start them up once a month to make sure they run and give them a load test once a year to make sure we can transfer load to them correctly, but on average they cover a power outage less than one time per year.”

An Azure data center with fuel cells, a hydrogen storage tank, and an electrolyzer that converts water molecules into hydrogen and oxygen could hypothetically be integrated with the electric power grid to provide load balancing services, the company said.

“All of that infrastructure represents an opportunity for Microsoft to play a role in what will surely be a more dynamic kind of overall energy optimization framework that the world will be deploying over the coming years,” Lucas Joppa, Microsoft’s chief environmental officer, said.

As we profiled back in 2018, Microsoft has been interested in testing fuel cells for some time. But its focus was originally on solid oxide fuel cells, which are fueled by natural gas. “They have the ability to make their own hydrogen out of the natural gas feed that they get,” Monroe explained. “They take natural gas, a little bit of water, they heat it up to 600°C, which is the temperature of a hot charcoal fire.”

The company is still exploring SOFCs for providing power - as the gas network is far more reliable than the electric grid, and the approach is more energy efficient. But the technology is still too expensive, and would produce carbon dioxide.

Instead, the company is now more interested in proton exchange membrane (PEM) hydrogen fuel cells, after seeing a demonstration by the National Renewable Energy Laboratory. NREL powered a rack of computers with a Daimler PEM fuel cell - with the only waste product from a PEM cell being water.

“We got intrigued because we knew that they were using an automotive fuel cell,” Monroe said. “An automotive fuel cell has a reaction time like a diesel generator does. It can turn on quickly. It can be ready for a full load within seconds. You can floor it, let it off, let it idle.” 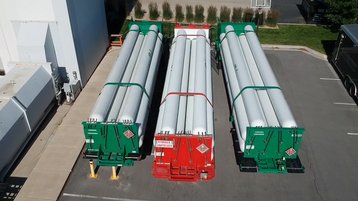 “It is the largest computer backup power system that we know that is running on hydrogen and it has run the longest continuous test,” Monroe said.

The company next plans to procure and test a 3MW fuel cell system, roughly level with the size of diesel-powered backup generators at Azure data centers.

Since in NREL demonstration in 2018, the cost of PEM fuel cell systems for backup power generation at data centers has fallen by more than 75 percent. If such a decrease holds, they could become price competitive with diesel generators in a year or two.

But there are other hurdles. 48 hours of backup power generation would amount to 100,000kg of hydrogen per average Microsoft data center, which would require storage somewhere - which may be hard for local communities to feel comfortable about.

While the element usually evokes images of the Hindenburg disaster, NREL's director of Computational Science Center Dr. Steve Hammond, told us in 2018 that it was safer than people think. “People ask about the volatility of hydrogen, but they’re perfectly comfortable driving around in an automobile with 20 gallons of gasoline,” Hammond said. “At NREL we’ve worked a lot on hydrogen sensors and technology for fueling stations. We work with hydrogen all the time, perfectly safely.”

For data centers to do the same, however, would require them to be more deeply integrated into the nascent hydrogen economy. “That’s where I think all of this gets interesting," Microsoft's Janous said.

Currently, 95 percent of hydrogen is produced from fossil fuels, emitting carbon dioxide and carbon monoxide as byproducts. To be truly green, the hydrogen must be produced with electrolysis, where electricity is run through water to separate the hydrogen and oxygen atoms - and that electricity must come from renewable sources. Even then, the production of hydrogen will always require more energy to be put in than can be retrieved, so some argue the solar energy could have been used directly - except in the case of data centers, storage remains an issue.

"As concerns about climate change are often mentioned as a driver for moving to a hydrogen economy, it is important to discuss the carbon implications of various strategies and whether or not carbon capture and sequestration is a viable option."