Northern Virginia's Loudoun County, home to the world's largest hub of data centers, is changing the zoning rules which determine where future facilities can be built to address concerns from local residents.

Data center development would be blocked along Route 7 and some other parts of the town of Ashburn, according to new zoning proposals [PDF] put to a meeting of Loudoun's Transportation and Land Use Committee (TLUC) on Monday night. The proposals also set out new environmental standards for building design and noise.

The new rules are intended to allay residents' fears while allowing the continued development of data centers which generate nearly one-third of local tax funding. 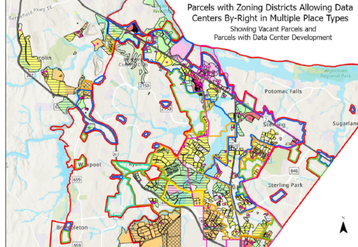 The Committee has asked for industry feedback on the proposals, which will go before a full Board of Supervisors meeting in late September.

Ashburn has been known as Data Center Alley for years. Data centers have gathered there, first for proximity to the dense aggregation of fiber networks there, and later, in order to be close to the key Internet giants like Meta/Facebook, Amazon, Microsoft, and Google that have settled there.

Loudoun County now has more than 26 million sq ft (2,415,500 sqm) of data center space, with another eight million (743,200 sqm) under development, according to Data Center Frontier. Trucks of steel and concrete feed building sites along its avenues, which are filling up with giant barns of wholesale data center space. It's tough for local developers to build fast enough. That's been a boon for some, like the church in Ashburn which funded a move to a more friendly community space by selling its warehouse location to a data center developer.

The County Supervisors, and Loudoun's executive director for economic development Buddy Rizer, say the sector provides an unrivaled revenue stream. Fact-checkers at WUSA9 verified that the county gets more than 29 percent of its money from taxes on computer equipment used in data centers (though the property makes up about 1.5 percent of the County's land. Add in the property taxes and the income is far higher. It's a revenue stream so large it sometimes creates hiccups. such as when building slowed in 2021.

That money doesn't comfort one Reddit user, who wanted to know why his property taxes haven't fallen as data center revenue has risen.

The TLUC's response is a set of proposals that would stop data center development in some areas where previously it had been allowed "by-right". The main focus here is keeping data centers off Route 7, where there is no more power infrastructure to support them. Route 28, meanwhile, still has capacity for more building, the Committee believes.

To achieve these goals, the Committee has embarked on a complex re-thinking of the "place types" used by zoning rules to classify locations. The debate has taken months, thrashed out in a series of "Data Center Discussion" meetings. Place types are being changed, and the permissions to build within them are also altering.

By-right development means data center approvals can be fast-tracked without any hearings with local boards, and the TLUC proposals want to remove by-right development approval from certain types of land, by changing the way they are zoned.

For instance, data center development is currently allowed "by-right" in "suburban mixed-use" locations, but the Committee wants to remove this right. This would take by-right development away from 887 acres of vacant land in 83 parcels.

Many of these parcels were along Route 7, which does not have power infrastructure to support more data centers. Because data center development was allowed by-right there, the County would have been forced to approve projects that demanded new powerlines along Route 7, against the wishes of residents.

Other place types where data centers would not be allowed would include "urban transit center", "urban mixed-use", "urban employment", and "suburban neighborhood"

If these changes go through, any existing data centers would not be affected, though they would be classified as "non-conforming" and would not have by-right approval for expansion and development.

Already approved projects will go ahead - but data center builders with undeveloped land ("land banks") present the County with a problem.

According to Loudoun sources, data center builders own some 13 properties currently zoned as "suburban mixed-use". They bought these plots for up to $2 million per acre, with the aim of building data centers there. If the proposals go through, data centers would be banned there.

These land-bank cases will have to be decided individually, but it sounds as if TULC will look favorably on them. Data Center Frontier reports Supervisor Tony Buffington said: “If they have bought land, we shouldn’t change what’s allowed on that land. They’ve made a considerable investment in Loudoun County.”

Turner was placatory, reportedly saying: “We want to protect existing data center developments. We asked the industry to come here and build. They’ve been great community partners. The goal here is to protect people with skin in the game.”

Taking the Loud out of Loudoun?

Even where data centers are not permitted "by-right," developers will still be able to apply for permission to build them. In these cases, and in many places where development is allowed by-right, the Committee wants data centers to face stricter environmental controls.

These include making the outside of the data centers look less ugly, and using "high-quality building design" while addressing specific cases of proximity to residential areas.

The proposals also mention limiting the noise made by air-conditioning systems used to cool the servers - a contentious issue in neighboring Prince William County, where residents protested this week that County Supervisors had no control at all over "catastrophic noise" from data centers owned by Amazon and others.

The design regulations would be applied to areas where data centers retain by-right development, including planned developments in the town center and in a research and development park.

The timeline for responses to the proposals is tight, and the TULC has apologized to the data center sector for this. The proposals had to go to the Board sooner than expected because altering zoning ordinances is such a "monumental project" according to TULC chair Michael Turner.