The county commissioned an 18-month study from Arup into the spread of Internet infrastructure in the world's data center hotspot, as it debates expanding development further with a new Dulles Cloud South section.

That new area could add yet another 56 million square feet (5,202,570 sq m) of data center space and one billion dollars of tax revenue annually, adding to the current $500m.

But some members of the Board of Supervisors’ Transportation and Land Use Committee spoke out against the proposal, and it faces a difficult road ahead.

The report found that another 4 million sq ft (371,600 sq m) is currently in development in the eastern section of Loudoun County, which was the focus of the study.

Loudoun currently has over 90 land parcels with data center developments, some of which may have multiple data center buildings.

However, locations of existing high voltage transmission lines were publicly available. Both providers cited challenges with creating additional transmission, and that proximity to existing power lines was generally advantageous for a site, as it required less new infrastructure.

Arup then created a map of locales within one mile of major transmission lines to show areas that are more suitable for data centers.

They similarly analyzed sites with access to reclaimed water, used by data centers for cooling. Both overlapped with the sites of most existing data centers, but there were a few facilities not served well by either utility type. 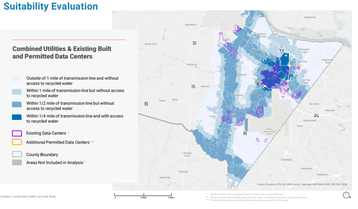 Part of this land could include building data centers along the Rt. 7 corridor, but there are currently no high voltage power lines, which would have to be built.

Instead, "the undeveloped area in the part of eastern Loudoun County covered by the study where there is remaining developable land that is the most reasonable opportunity for future data center development without current zoning or General Plan Place Types that allow for data centers," the Arup report claimed. That region already has fiber and high voltage power infrastructure.

This would involve rezoning areas to the south of the Dulles International Airport and south of Braddock Road for data centers, in an area tentatively called Dulles Cloud South.

In a section of the study written by the Loudoun County Department of Economic Development (DED), it states that the new area "could potentially enable the development of more than 56 million square feet of data center space and mean over one billion dollars of tax revenue annually to Loudoun County.

"DED would recommend setting new restrictions on this land, such as requiring a commitment to 100 percent renewable energy to power the buildings, on-site renewable energy generation, the adoption of or preparation for new energy technologies, increased screening and open space requirements and contributions to the county’s housing fund." 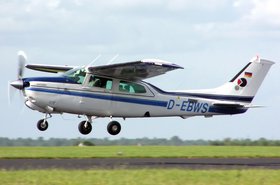 However, the Board of Supervisors’ Transportation and Land Use Committee had a mixed reaction to the proposal.

First, they said that data centers should not be built along Rt. 7, and voted unanimously to recommend the Board of Supervisors to immediately update the zoning rules to prohibit data center builds there.

The county is currently updating its zoning ordinances to reflect the new 2019 comprehensive plan, which does not have data centers along Rt. 7.

As for Dulles Cloud South, a similar pitch by DED director Buddy Rizer to include space for it in the comprehensive plan during the previous Board of Supervisors term was previously shot down. It again faced a hostile reaction from some members at a committee meeting.

“I don’t want see any more than the one that’s already there within the [Transition Policy Area] south of the [Dulles] Greenway,” Supervisor Tony R. Buffington (R-Blue Ridge) said at the meeting, as reported by Loudoun Now.

“And this Dulles Cloud South idea is horrible to me, in my opinion. I will fight this so hard every step of the way.”

He added that if the current space zoned for data centers is all used up, “then maybe we have just run out of data center space.”

County Chair Phyllis J. Randall (D-At Large) concurred: “I certainly would not support any data centers in the Transition Policy Area. When we start creeping in those places, it’s just not a long time to creep further.”

The committee will make recommendations to the full Board of Supervisors, which would then decide whether to continue with or shelve the Dulles Cloud South proposal.

Across the county border is Prince William County, also home to a prodigious number of data centers. Industry proponents have pushed for a similar giant data center rezoning initiative, replanning 2,133 acres of the county's "rural crescent" for up to 27.6 million sq ft (2,564,100 sq m) of data centers.

But the 'PW Digital Gateway' has also seen pushback from locals, archaeologists, and environmental officials - who warned that it would harm nearby forests, streams, and wildlife.

PWC's own Board of Supervisors also has to vote on the project, and has promised more public consultation this year.

Neither board has set a date for their votes.