A small plane experienced engine troubles before it could reach Dulles Airport, forcing the pilot to land near NTT Global's Ashburn data center campus in Virginia.

The 1977 Cessna 210 landed without major damage or fire, coming to a halt when it hit an embankment across the street from the data center. Pilot Aaron Adams, 28, was treated for minor injuries. 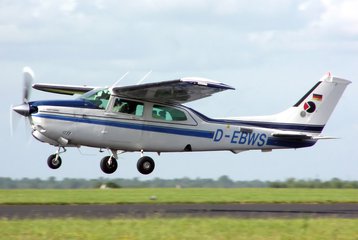 A Cessna 210 similar to the plane involved – Wikimedia / arpingstone

The State Police, FAA, and National Transportation Safety Board are investigating the emergency landing.

Adams radioed airport officials that his engine had lost power at approximately 4pm, forcing him to land a couple of miles short of the busy airport.

The campus, originally operated under the RagingWire brand, could grow to add another five data center buildings.

Slightly further away, and you will find more Digital Realty data centers, as well as CloudHQ facilities, and data centers operated by Equinix, Sabey, AWS, H5, Stack Infrastructure, QTS, and Evoque. Yet further away are CyrusOne and Vantage data centers.

Further projects are in development by Microsoft, AWS, and Google, as well as by many of the companies listed above.

Northern Virginia is the world's largest data center hotspot, with Loudoun County as the most popular location. In Loudoun, most of the development is concentrated in Ashburn and the Dulles Technology Corridor.

A data center land study commissioned by the county this month found that there is more than 26 million square feet (2,415,500 sq m) of data center space in Loudoun County as of 2021.