Building as fast as they can

Northern Virginia is not like any other place on earth. Data centers can’t be built fast enough to keep up with demand

”You realize we don’t need you, don’t you?” said one data center marketing manager, welcoming me to his facility at the start of a tour of Ashburn, the epicenter of Northern Virginia’s exploding data center hub - commonly known as Data Center Alley.

That wasn’t really what I wanted to hear. Tech journalists are much more used to being courted by vendors and service providers, eager for exposure and the new business they hope it will bring. This man’s point was that demand for data centers is so high that the world’s largest colocation providers - who all cluster in Ashburn - cannot build fast enough to meet it.

These operators have no need of the publicity I can bring them. They have all the customers they need. 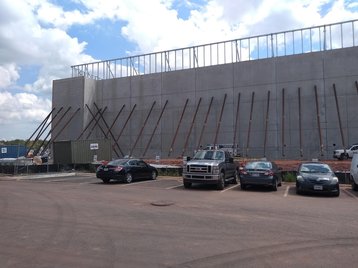 They may not have needed me, but those operators went to great lengths to make me welcome. I went there to see QTS, but as soon as I heard how the company brought 8MW online in ten months, PR and analyst relations head Carter Cromley insisted on driving me to my next appointment - at one of his biggest rivals.

In Ashburn, it turns out, rivals are also best buddies. Without exception, each of my hosts knew my next contact, and drove me to meet them.

It’s not as if they had to drive far. Nowhere in Ashburn is more than a couple of miles away. As we zipped past endless flows of buildings, Dan Ephraim of Infomart kept a running commentary: in ten minutes, we’d passed a million square feet of white space.

Everywhere, these buildings are springing up, and on Waxpool Road, flatbeds hauling giant concrete beams and girders are as common as delivery vans.

On Digital Realty’s huge site, Jon Litvany showed me the high-tech barn-raising that is modern data center construction. Three buildings are going up next to each other. In one, pre-cast concrete walls are propped in place, In the second, the interior structure is going in, and holes in those walls are ready to receive skids of M&E Equipment. In Building L, the generators are lined up outside, and the halls are filling with kit.

I saw halls with an acre of space, so big they featured diagonal cross-bracing at the center, in case of earthquakes.

Digital is right opposite Quantum Park, the former Verizon campus where the Metropolitan Area Exchange (MAE-East) was conceived, that was instrumental in creating the Ashburn honey pot. Elsewhere, I entered an AOL data center from the 1990s, now owned by Infomart, and repurposed for the modern age.

I saw QTS’ facility, the first to build upwards on three stories - an index of the cost of land in Ashburn.

Another index was Christian Fellowship Church, which worships in a former warehouse on a 20-acre plot surrounded by data centers. With land prices reportedly passing $1 million per acre, the church has sold up, and will be moving (over more than a year) to a smaller plot close to One Loudoun, the closest the area has to a downtown.

Data centers have a generally-cosy relationship with the rest of society. They bring in some $200 million of tax revenue, with little in the way of infrastructure demands, beyond their appetite for land and power. Ashburn can therefore be prosperous - and the Church gets to move on instead of having to prop up an aging building.

From QTS on, everyone told me that hyperscalers are the big customer, buying anything from 60 percent to 100 percent of the space in any new data center. There’s also a strong helping of enterprise customers (also known as “hybrid cloud”), and CyrusOne’s Stu Dyer explained to me how all these players mix the two customers.

RagingWire certainly had the most beautiful facility I saw. It was virtually “gold-dipped” with the same attention to detail which won RagingWire’s Texas facility plaudits in last year’s Beautiful Data Center Award. CEO Doug Adams explained how building for hyperscalers will take the margins down but excellence still counts.

Despite the friendly introductions, everyone could point to flaws in their rivals’ business plans - even though it was abundantly clear that none of those were having any serious impact on business.

How come they were all still friends? “It’s only the end of the second innings,” they told me - a US reference which means it’s still early in the game, and the game is not yet serious.

There’s a lot more to learn about Ashburn, and as the game hots up, I will return to it.