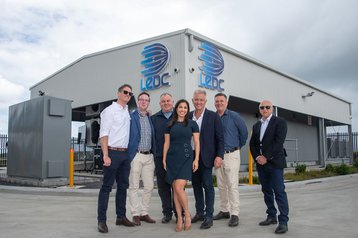 “Today we cut the ribbon of our brand new data center in Coffs Harbour, with over 40 in attendance,” the company said on LinkedIn this week. “The new design Altas 30-rack facility is in high demand, and it was wonderful to have so many of our customers there to celebrate with us today.”

Founded in 2018, Leading Edge is deploying Edge facilities across Australia, starting in New South Wales (NSW). The company uses prefabricated data center modules from Schneider Electric – generally in either 30 or 75 rack configurations – that can be quickly erected and used. Coffs Harbour is a city on the New South Wales coast between Sydney and Brisbane.

Leading Edge has data centers in Tamworth, Newcastle, Albury, and Dubbo. The company plans around nine more in NSW before moving into Victoria and then to Queensland and the Gold Coast. It previously secured AUS$20m in 2020 from Australian investment firm Washington H Soul Pattinson and AU$35 million from DigitalBridge.

The company was granted approval for a data center in Wagga Wagga in January 2022. It is also looking to build in Bathurst, Parkes, Newcastle Airport, Gosford, Orange, Wollongong, Port Macquarie, and Nowra. Wagga Wagga is reportedly currently under construction.