Google buys 20 hectares of land in the Netherlands

Search giant won’t give up on another Dutch data center

Google is buying twenty hectares of land in the Netherlands on which it plans to build a data center.

RTV Noord reports the search and cloud giant has acquired the land from the municipality of Groningen to build a data center. 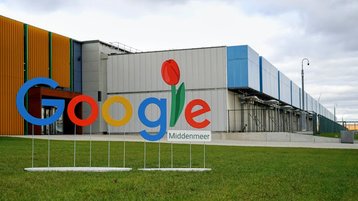 The data center will reportedly be a maximum of eight hectares on the Westpoort industrial estate, located west of Hoogkerk. More specification details or the terms of the land acquisition deal were not shared, but the company aims to begin construction in the autumn of 2023.

According to the company, it is a 'small-scale satellite facility.' Google said the data center is necessary because "more and more people are using digital resources and organizations are switching to working from the cloud en masse." Google hasn't made an official announcement about the news and it is not known how much money the company is investing in the project.

After the purchase agreement with the municipality has been signed, Google will submit an application for an environmental permit.

Alderman Carine Bloemhoff (PvdA) told RTV she will sign the purchase agreement shortly: “We set strict landscape and urban planning requirements," she says. "For example, greenery and water must be installed around the data center. The roof of the data center is also covered with at least 70 percent solar panels.”

The residual heat from the data center must also benefit the Groningen Heat Network and Google is making a “substantial” financial contribution to the construction of roads in the Westpoort industrial estate.

Earlier this week, it was reported that QTS recently spent $9 million in a deal with Groningen Seaports to buy land near its two data centers in the province.

The news comes at a difficult time for data centers in the Netherlands, as state and local governments look to restrict hyperscale development.

In February, the Dutch government enacted a nine-month moratorium on permits for hyperscale data centers, defined by the government as facilities with more than 10 hectares and with an electricity demand of 70MW or more.

However, specific areas within the provinces of Groningen and North Holland were exempted as they are at the edge of the Netherlands and have access to renewable energy (though the latter has sought to bring in its own pause on hyperscale developments).

Microsoft and Google have facilities in the Hollands Kroon area of the Netherlands. Work on a second Microsoft facility is underway but has been delayed by a number of legal challenges; that facility is seemingly exempt from this announcement due to its location in an industrial park. Reports suggest plans for a second Google data center in the area have been dropped in the wake of local resistance.

Another data center proposed in Appingedam, in the municipality of Eemsdelta, has seemingly also been paused by the government hyperscale moratorium. An unnamed developer was aiming to build two 54,000 sqm (581,250 sq ft) facilities offering 200MW across 20 hectares in the Fivelpoort business park. Local reports suggest the company behind the project is one of the ‘big five’ hyperscale firms, with Google heavily suggested.

Alderman Annalies Usmany-Dallinga told local press the project was already in doubt before the government moratorium, and is now definitively off the table. The developer is now reportedly in discussions with the municipality about whether a smaller data center is feasible.

Earlier this year Google acquired 50 more hectares of land in Hamina, Finland, following a number of land purchases across Europe in 2021.

Last year the company bought a large plot of land and gained permission for a data center in Horndal, Sweden. It also acquired 120,000 square meters (1.29 million sq ft) of land in Taulov, in Denmark’s Fredericia municipality adjacent to its existing Danish data center.

2022 has seen Google launch new US cloud regions in Columbus, Ohio; Dallas, Texas; as well as its first Spanish region in Madrid and an Italian region in Milan. It is also expanding its footprint in Omaha, Nebraska; and acquired land in Kansas City.

The company has paused its plans for a data center in Luxembourg, however, after local protests, and concern over the fact that the data center could use as much as 12 percent of Luxembourg's electricity.