AWS has been granted permission to build two data centers in Dublin.

The company was granted permission by Dublin City Council last month to develop two data center buildings on the site of a former Ricoh building once earmarked for T5’s first European facility. 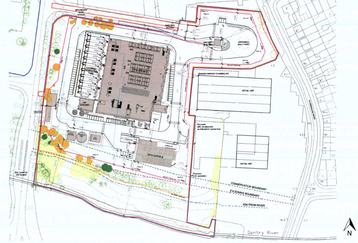 The same site was previously granted planning permission for a 9,250 sqm (99,500 sq ft) data center through Clonmont Development Ltd. in 2019 originally for T5 data centers for what would have been the company's first European facility. Permission for the project was delayed by Dublin City Council after it told the company earlier this year that it must provide "a large amount of additional literature" to prove that granting permission for the new facility in Clonshaugh ‘would not create an over-concentration of the facilities’ in the area.

Amazon is also planning to develop another two data center buildings on the Woodlands & Former Diamond Innovations Site nearby.

Despite the planning permission being granted, a de facto moratorium appears to be in operation since the turn of the year in Dublin after EirGrid said the grid in the capital was under strain, and no new data center applications are expected to be granted a grid connection before 2028. It’s unclear if Amazon had been previously granted a connection by EirGrid.

Interxion (Digital Realty) paused plans for expansion in the area as a result, while Dataplex recently entered voluntary liquidation after EirGrid denied power contracts at two data center sites. Applications previously granted a connection before the ban came into force, estimated to be more than 1GW of developments, are still set to be built and connected.

Amazon told council planners that its new 115MW wind farm project in Galway which became operational this year would support the company’s data centers in the Republic and add to its existing wind farm projects in Cork and Donegal.

The T5 proposal apparently went nowhere. A US wholesale colocation provider, T5 had international expansion plans, including a campus in Cork. These seem to have all been shelved, after investors IPI split T5 in two, with part going to form Stack Infrastructure, a global wholesale data center builder, with projects round the world. Since the division, T5 has stuck to US locations