Hiranandani, NTT, and Adani all granted permission for parks

The state government of Northern India's Uttar Pradesh has granted approval for four data center parks in the region. 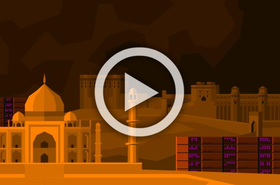 Regional experts debate the opportunities and challenges ahead in India

Whether the approvals are for previously-announced facilities or new developments isn’t clear. Hiranandani’s Yotta announced plans for two more buildings at its 20-acre campus in Noida in late 2021; there is a total of six buildings planned at the site. NTT acquired six acres of land in Noida in January 2021 with plans to build a 70MW facility. Adani has acquired two plots in Noida totaling more than 70,000 sqm. (753,500 sq ft).

India is seeing a boom in data center development, with the Uttar Pradesh region seeing a flurry of investment, especially in the city of Noida. Sify, STT GDC, Reliance Jio, and CapitaLand are all also planning to develop data centers in the area.