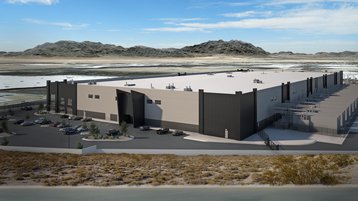 “Since our founding, Novva has sought to bring purpose-built, futuristic, eco-friendly facilities to the Western United States and we've been very selective and intentional with our site locations," said Wes Swenson, founder and CEO of Novva Data Centers. "North Las Vegas is an ideal location for a data center because it allows us to take advantage of the abundant renewable energy alternatives, and its proximity to the California and regional markets. It is a great addition to our other western data center locations."

"This also gives us another opportunity to implement our water-free cooling technology, which will save approximately 150 to 200 million gallons of water a year, and in 2024 we plan to deploy atmospheric water generation for landscape needs," added Swenson. "The facility will also benefit from tax abatements from the state of Nevada, which were approved in the summer of 2022."

Switch is the largest data center provider in Nevada, with DataBank, EdgeCore, and Deep Edge also having a presence in the state. Google launched a Nevada-based cloud region in 2020, with AWS launching a Las Vegas Local Zone last year. Apple operates a facility in Reno.

In 2021, the company also acquired a 6MW facility in Colorado Springs and announced plans to expand it to 30MW for $200m.

Earlier this year the company raised another $355 million from CIM Group. Novva plans to expand across the United States and expects to offer 1,000MW of data center capacity by 2027 at several strategic, yet-to-be-named locations.