Nautilus Data Technologies, the company known for its floating data centers, is building a 60MW facility on dry land, in the northeastern-most state in the US, Maine.

The 13-acre development, on the site of the former Great Northern Paper Company mill in Millinocket, will run on 100 percent hydroelectric power, and use Nautilus' water-cooling system fed by the Penobscot River. The $300 million project has committed tenants and the first phase is due to start operation by the end of 2022. 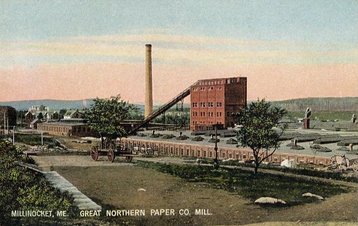 Nautilus first announced plans for a data center on a re-purposed barge in California in 2015. It would be cooled by the water in which it floats, circulated through a secondary cooling system. In the following five years, Nautilus has launched its first floating data center in California, while pushing ahead with plans for a similar facility in Ireland. At the same time, it has had investment from Orion Energy Partners, and from Keppel in Singapore.

In briefings, the company has said data centers using its cooling system do not have to be afloat, and shown plans for riverside facilities. These would use the same type of modular design and recirculate water from rivers and lakes, returning it untainted, making the idea suitable in areas where there are water shortages.

The Great Northern Paper Company began producing paper in Millinocket in 1902 and was the world’s largest newsprint producer during the golden age of newspapers. In the 21st century, the plant went through a series of owners, and a bankruptcy, before finally closing in 2014, and becoming an industrial park in need of regeneration.

"This paper mill produced almost all the newsprint for the East Coast, and newspapers were how information was delivered to everybody at the time," Nautilus CEO Jim Connaughton told DCD. "As data centers fuel modern-day information delivery, he said: "We're taking a defunct paper mill and turn it into a digital version."

The data center will have "an abundance of hydroelectric power," said Connaughton. The project has 60MW of power from the start and can expand as needed. Neatly, the data center can draw the small amount of water it needs for cooling from the same lake as the hydro power station, he said.

"We're halfway up the hill, below the reservoir that feeds the hydro plant, he said. "Every hydro station has a bypass - we will take advantage of that, taking water from the reservoir. We can take cold water in and use gravity to feed it out".

With no need to pump the cooling water, the site needs even less power: "We'll have the lowest PUE in the world and be even more reliable!" The water is very cold, so all the heat from the data center can be absorbed without affecting wildlife, he said.

Nautilus will get federal tax advantages because Millinocket is one of seven economically distressed communities in Penobscot County which have been designated Qualified Opportunity Zones. - but this is not just a financial incentive he says, it's a scheme which actually binds the businesses into the community.

The idea of Opportunity Zones dates back to the Obama era and has been handed off through Trump to Biden: "It's hugely bipartisan. It's a directed effort to enable tax-free financing of renewal of urban communities. You don’t pay tax as long as you are invested in the community. It's a very powerful program."

State governors chose Opportunity Zones at the request of local communities who want investment and renewal. "It's being driven bottom-up. This incentivizes you to invest into communities that are looking for a hand up."

Connaughton says Nautilus is the first data center to be built in one of these Zones, and this means it will be welcomed by locals, rather than treated with suspicion. The first customers into the site will be local operations: the Jackson Laboratory and the Maine State Chamber of Commerce.

Beyond that, Connaughton expects the potential of a large campus with inexpensive power will lure in "hyperscalers, burgeoning government RFPs, and hybrid cloud enterprises looking to future proof their infrastructure."

It's a somewhat remote location so customers will have to do without near-urban latency, but it is on a local fiber network, Maine's “Three-Ring Binder” fiber-optic network, completed in 2012 which has three fiber rings and provides low latency connections onward to other hubs via Boston, including New York, Chicago, and London.

The launch on Saturday 5 June will be attended by 200 local people. “We know the importance of being digitally connected and what it means for our economy. This project utilizes our Three-Ring Binder fiber network to propel us to the forefront of not only the most advanced computing technology, but the most sustainable data infrastructure globally,” Maine Governor Janet Mills said in the press release.

“Nautilus’ new facility will establish Maine as an international leader in environmentally sustainable data storage technology and lay the foundation for future economic growth,” added US Senator Susan Collins. “By breathing new life into the site of the former Great Northern Paper mill, this substantial investment will help catalyze the creation of much-needed jobs in the region, attract other innovative companies, and strengthen the community.”

Nautilus says the Millinocket Data Center will cut the energy used for cooling by 70 percent compared to a traditional data center, and cut energy-related CO2 emissions by more than 30 percent. It will not consume drinking water or use greenhouse gas refrigerants or chemicals, and will not produce wastewater. It will also make no noise, and cause no harm to fish or wildlife.

Nautilus has bought a 99-year lease from Our Katahdin, a local non-profit. The data center already has committed customers including The first phase of the $300 million project is expected to be operating by late 2022.