The data center is due to be fully completed by December

Now that the exterior is complete, the IC3E data center, near Sydney, will undergo a process to fill out its interior.

Built-to-suit, IC3E is designed to meet the needs of private companies while also supporting Australian government services. Macquarie Telecom Group, the company’s parent company, holds about 42 percent of government workloads on its network. 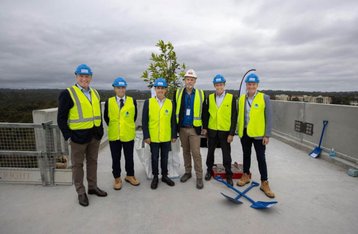 Despite disruptions caused by Covid-19 to other construction projects in Australia, the work on IC3E was given the OK by authorities due to demand to house federal services.

When finished, IC3E will be accredited SCEC Zone 3 (or higher), SOC2, Uptime’s Tier III certification, and ISO 27001 certified. Macquarie also believes IC3E will have a PUE of 1.28 when online. Due to its federal workloads, the data center will also have 24x7 onsite security and support, staffed by government-cleared engineers.

David Hirst, Group Executive, Macquarie Data Centres, said: “Topping out IC3E, in spite of the many challenges we’ve experienced in 2020, furthers Sydney’s position as a regional data center hub and Macquarie Data Centres’ key role within it. There’s never been a better time to deliver new capacity in Asia-Pacific… While some global companies were required to halt construction on their new data centers because of Covid-19 regulations, we’re pleased to have been allowed to continue building across this year – and to have done so safely and efficiently, with limited impact from Covid.”

Last year, Macquarie DC announced IC3E’s construction. At the time Macquarie said the data center would be online by December 2020 and ultimately cost around AU$80m ($55m). Also due to open in December is another Macquarie DC facility, IC5, which will join the company’s Canberra campus and host government services alongside its neighbor IC4.

Update: The internal fit-out will include an efficient cooling system which uses the outside climate where possible, installed by Hurley Palmer Flatt. “At a time of extreme weather events brought on by climate change, this gives end users with highly valuable data, peace of mind," said Hurley Palmer Flatt Director, Peter Gaston. "The data center community has a massive responsibility to improve the efficiency of its assets."