Green Mountain is expanding its RJU1-Rjukan facility in Norway.

The company said this week it would construct a new two-story, 20MW building. The first phase will be ready for service in March 2023.

The project will see €100 million ($99.9m) invested and all residual heat from the new facility will be used by a nearby land-based fish farm. 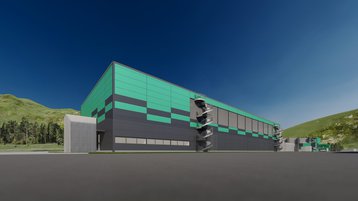 “We have experienced a massive interest from international companies wanting to move their workloads to more sustainable locations. Our facility in Rjukan checks all the boxes when it comes to renewable power, energy-efficiency, and heat re-use,” said Greene Mountain CEO, Tor Kristian Gyland.

The campus, also known as DC-2 Telemark, was begun in 2018, and was first expanded when Volkswagen took 2.75MW of capacity there. In June, the company announced it was adding 4.5MW of capacity and expanding an existing building on the site to add a further 300 sqm for an unnamed client.

As well as being close to hydroelectric power plants, DC-2 is next door to the site of a new indoor trout farm from Hima Seafood, due to open in 2023, which will use excess heat from the Green Mountain campus to raise young fish.

Pipes will circulate water heated in the data center campus to a new trout farm being built by Hima Seafood 800m away from DC-2. After giving up its heat to the farm, the cold water will be returned to DC-2.

Green Mountain has a long association with fish farming, which is a major industry for Norway. Waste heat from the company's flagship data center DC-1 Stavanger, in a former NATO arms store above a fjord, is used to warm an experimental land-based lobster farm.

Israeli real estate firm Azrieli Group acquired Green Mountain from Norwegian real estate firm Smedvig for $850 million last year. The company is currently building a 13.5MW facility outside Oslo and recently completed a 3.5MW expansion at its mountain hall facility at Rennesøy. In the UK, it recently acquired a data center outside London in Romford.

“There is a lot of activity in the market, and we expect even further growth the next 12 months. We have several new projects in planning, which we hope to announce shortly. Green Mountain will continue to deliver on client commitments, even in these challenging times,” added Gyland.