The European lobster fishing industry is in trouble. The much-prized crustaceans are in huge demand as one of the most expensive items of seafood on restaurant menus. Yet the crustaceans take years to mature, and fishing has decimated populations.

For any other food species, the answer would be to set up fish farms, but lobster cultivation faces several seemingly insurmountable problems. Lobsters need relatively warm seawater (20°C/ 68°F) to grow, and they are cannibalistic, so they have to be reared in individual pens. This has made conventional fish farms too labor-intensive and energy-intensive to be economic.

For 21 years, a group in Norway has struggled to overcome all these hurdles to set up the Norwegian Lobster Farm. After endless setbacks, the group is finally set to go into full production next year - and by-products from a local data center are what's got the project across the finish line. 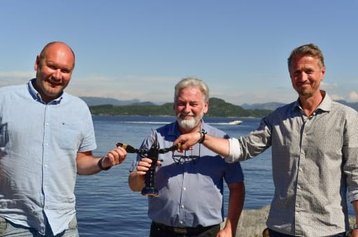 It is possible to hatch lobsters, and grow them past the larval stage in dryland nurseries, such as the UK's National Lobster Hatchery in Padstow Cornwall, but growing them to full size has been too demanding for any land-based farm, says CEO of the farm, Asbjørn Drengstig.

"Juveniles take six years to mature, because they don't grow in the wintertime, because the temperature is too low in the sea," says Drengstig.

Kept in 20°C water all year round, lobsters can mature in two years. But during that time, it is very expensive to hand rear them with carefully controlled feeding. And keeping the water warm is expensive too.

The Norwegian Lobster Farm has been able to develop two technologies: a robotic system for automating the intensive process of feeding and nurturing individual lobsters, and a system that economizes on heat by cleaning and recirculating the warm water in the facility. This reduces heat requirements but adds complexity.

It has been an epic struggle, says Drengstig: "At first we needed to do basic R&D, to reveal the growth cycle and all the things we needed to know.

"Then we tried to scale up - and then the financial crisis came in 2008 which restricted further growth. And then in 2011, the whole farm burned down to the ground. We lost everything overnight. And then it took some time to revitalize the company and get it back on its feet."

That recovery had the backing of two EU funded projects, Automarus and Devaela, to fully realize the system of recycling aquaculture technology (RAS), and the robotic lobster nursery, which uses vision systems to make land-based lobster farming viable, by tracking individual lobsters, feeding them precisely, and keeping them separate to reduce cannibalism.

"We organize the whole hatching operation to separate different stages and reduce the cannibalism," Drengstig explains. The farm is validating an advanced system which will allow live monitoring of all the stock, and automated feeding: "We are able to track each single lobster every day, we have individual tracking throughout the whole cycle. No other aquaculture system can track on individual basis."

He goes on: "The main challenge is to have accurate feeding. When they are small we actually feed one-two millimeter size portion every day. Very high accuracy, right?"

To conserve heat, the farm has been using recycling aquaculture technology (RAS), a long term for the process of recycling its water to minimize the waste of heat. By continually reusing the water, the farm can reduce its water wastage to five percent, but that is at a very high cost in capital terms. RAS is expensive.

All this left the farm struggling to get to finally opening, even ten years after the fire. To Drengstig's surprise, the farm had a neighbor who could make the complexity of RAS irrelevant, and push the project across the finishing line. 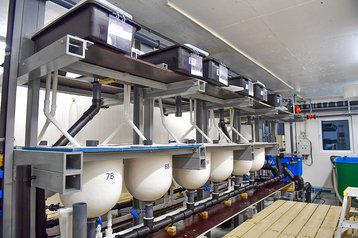 Colocation operator Green Mountain's DC1-Stavanger data center is located in a bunker on Rennesoy, the next island along from the Lobster Farm. DC1 is cooled by a salt-water fjord, taking in water in at 8°C (46.4°F) and releasing it at 20°C. It produces warm water all year round, at the ideal temperature for Drengstig's crustaceans.

The two found each other through mutual contacts. Fishing is central to Norway's culture, and Green Mountain is well-connected in the world of fish farms. It also offers waste heat to a trout farm on Rennesoy.

The company's previous CEO, Knut Molaug, came to the company after a long career in the world's largest aquaculture company, Akva, and left in 2017 to run a firm making fish farm robots, Aqua Robotics. Aqua's bots are aquatic, so there aren't any at the Lobster Farm, but Molaug is on its board.

The partnership between the two has no downside, says Drengstig.

Norwegian Lobster Farm is building a new facility next to Green Mountain DC1, which should open in 2022, and produce lobsters for restaurants within a year.

The arrangement will save 15 percent of the farm's operational cost because it no longer has to heat any water. But there's a bigger saving on equipment, because Drengstig can do away with the complexity of RAS and save 25 percent of its capital investment.

"The main benefit is we reduce our environmental footprint by using their waste heat," says Drengstig, "because normally we have our recycling system to preserve the heat inside the farm. We only exchange five percent, but still we need to use heaters to heat up the temperature of the water.

"This would just be flow-through water, and it simplifies the operation, it will be a different world." 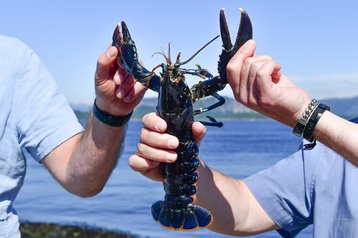 Data centers have the best heat

Drengstig says he has looked at other sources of warm water, but they are not steady enough. "The problem for me is that suddenly they have maintenance, and then they shut down - and then you have a fluctuation in temperature."

By contrast, data centers are steady: "They can never stop. They have redundancy, and will never stop the warm water flow. If the water stops, they have much bigger problems than we have!"

The relationship is close, he says: "It's like a hand in a glove. I use the term circular economy for reducing the footprint. Increasing sustainability and utilizing energy, and organic material, I think the world is turning towards greener thinking to reuse what previously was a waste. Now it's actually a resource."

For the last 21 years of struggle, the Lobster Farm has been a little like the creatures which it nurtures - growing when the temperature allows and waiting patiently for conditions to change.

"Before the fire, we had tremendous reviews from culinary chefs and gourmet magazines. It has been a fantastic journey going downstream in the value chain. We saw that this product actually has its rights in the world, so we kept on going."