Green Mountain is to use waste heat to warm a land-based trout farm in Rjukan, Norway.

The data center firm and Hima Seafood have entered into an agreement to direct waste heat from the DC2-Telemark data center to what will reportedly be the world's largest land-based trout farm.

Construction on the farm, which will be around 800 meters from DC2-Telemark, starts this year. When fully operational in 2023, the waste heat will be used in the production of 9,000 tons of trout annually.

The two facilities will be connected via a pipe system; Heat exchangers will ensure the Hima facility can use the energy from the water to obtain the correct water temperature for its recirculation aquaculture technology (RAS) solution. The same water, now at a lower temperature, will subsequently be returned to Green Mountain and reused in the cooling of the data center. 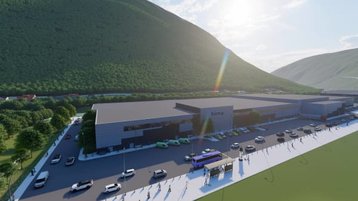 “Green Mountain’s waste heat represents a significant cost saving in our production, and we are thrilled that our heating requirements can help reduce the environmental footprint of Green Mountain and help cool the data center in return,” said Hima Seafood CEO, Sten Falkum, who called the deal a ‘win-win solution’ for both parties.

“Although our data centers run on 100 percent renewable hydropower, we do not like to waste the energy,” added Green Mountain, Tor Kristian Gyland. “This project is a breakthrough example of circular economy – where the output of one company can benefit another with an environmental benefit on top.”

Last week Green Mountain announced a similar project involving a land-based lobster farm. The company will pipe saltwater from a fjord through its DC1 facility to the Norwegian Lobster Farm; the first land-based fish farm to grow plate-sized lobsters. The agreement offers the farm a steady supply of water at the 20°C (68°F) temperature which lobsters love, reducing the farm's costs and environmental footprint.