The facility, and adjacent available land, will be operated by Green Mountain - its first data center outside of Norway. 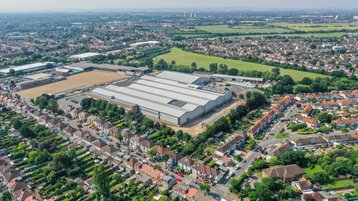 The company also operates the 7.5MW DC2-Telemark facility in Rjukan as well as DC3-Oslo just outside the capital city. It also has plans for a campus in the Kalberg Valley, and last year bought 50,000 sqm (538,000 sq ft) at the Haugaland Business Park in Gismarvik for a new data center.

“We are very excited to expand our operations outside of Norway and this site is a perfect match for us. London is an extremely important data center hub and a must-have location for many international companies," Tor Kristian Gyland, CEO of Green Mountain, said.

"With this expansion, we can offer a broader portfolio of sites with immediately available green power, and serve clients who have capacity requirements or need to remain in the London area while still achieving their sustainability targets. This is a long-awaited request from both our current and prospective clients.”

Speaking to DCD at DCD Connect Silicon Valley, chief sales officer Svein Atle Hagaseth said that Green Mountain was eying further expansion opportunities in another country in Europe - but said it would only develop in locations where it can secure renewable power.

The London acquisition also marks the end of Infinity SDC, which slowly declined as it sold off its portfolio. Back in 2015, it sold its Slough data center to Virtus; two years later its Stockley Park facility was acquired by Zenium; and in 2018 it sold land in Stratford to the Victoria and Albert Museum.

The Romford facility was its last data center, and is capable of supporting 'up to' 40MW of IT load.

“I am delighted that the Infinity Team and our East London Campus will become part of the highly successful Green Mountain business," Stuart Sutton, CEO of Infinity SDC, said.

"It will accelerate the sustainable development of this key London location with immediate benefits for our customers and staff. Green Mountain have a vision to 'Set the Green Standard' which will bring a range of exciting options for our existing and future customers."