Leaving it with a single remaining campus, in Romford

London-based colocation provider Infinity SDC is planning to sell the property in Stratford on which it had planned to build a data center, making way for the Victoria and Albert Museum’s new Collection and Research Centre.

The sale leaves Infinity with only one remaining data center campus, located in Romford, having sold its Slough site to Virtus in 2015 and its Stockley Park facility to Zenium last year. 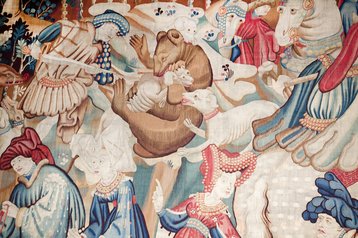 One of the many tapestries adorning the walls of the V&A Museum, London – V&A

The planned 100,000 square foot (10,400 sq m) data center, first announced in 2013, was to be located at Here East building in the Queen Elizabeth Olympic Park, but was delayed for unspecified reasons. Infinity did not respond to a request for comment from DCD to ascertain whether the facility was ever operational, but Stuart Sutton, the company’s CEO, said that it planned to continue developing its campus in Romford.

The vacated premises in Stratford, meanwhile, will allow the V&A Museum to pursue its own expansion plans. Built in 1852 and formerly called the Museum of Manufactures, the V&A is the world’s largest museum of decorative arts and design, housing a collection of more than 2.3 million items from around the world.

As well as the new collection and research center in Stratford, the public body is building a new photography center, establishing a museum of childhood, and refurbishing the Raphael Gallery - containing tapestries made for the Sistine Chapel in the late 1400s - in its original location in Kensington.