The servers could be keeping more than 70,000 Danes nice and toasty

Facebook has announced that its data center in Odense, Denmark, is now helping to heat up to 7,000 local homes.

When the 50,000 sq m (500,000 sq ft) data center campus was announced back in 2017, Facebook promised to connect it to the local district heating system in Odense, which is Denmark's third-largest city. The facility began operation in September 2019, and the planned local heating project has now gone live, according to a Facebook blog post by Lauren Edelman, Facebook's energy program manager. 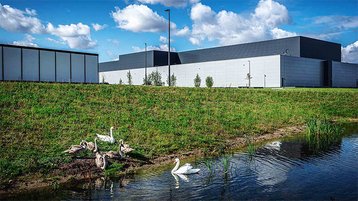 In Sweden, the well-established Stockholm Data Parks pays tenants for their waste heat, while the EcoDataCenter campus, more remote from urban areas, is sharing its heat with local industry.

In Denmark, Fjernvarme Fyn, the company which runs Odense's district heating system, helped Facebook design and build the system which will supply up to 100,000 MWh of energy per year in waste heat that could warm up to 6,900 homes.

The system circulates water from the Odense district heating system into Facebook's 50,000 sq m campus, where it is routed in insulated steel pipes to the roof of the data center, where it is passed through copper coils located inside each of the data centers 176 cooling units. The water picks up low-temperature heat and is channeled back to Fjernvarme Fyn's heat pump facility. Fjernvarme Fyn then uses heat pumps to warm the water further making it hot enough to be useful in the district heating system.

"Heat pumps are not new — they are a very big part of the Danish heating strategy to phase out coal and natural gas — and neither are coils to recover heat. It’s the pairing of these two at hyperscale that is innovative," said Edelman in her blog.

The City of Odense Mayor, Peter Rahbæk, Juel said: “It’s amazing because every time we post pictures of our pets, family, and whatever on Facebook, it will produce heat that will heat up to almost 7,000 houses.

The Odense facility has been online since September but has still been undergoing construction work aside from the district heating system.

Facebook will be pleased to have good news to report from Odense. Last year, the Odense facility was censured for poor labor conditions, and its sister building over in Esbjerg, Denmark, was eventually canceled in March 2019.