The $1 billion data center project in Virginia comes on stream

The facility at the White Oak Technology Park has 970,000 square feet (90,116 sq m) of space in its first phase, but could eventually be more than double that size at 2.5 million sq ft (232,258 sq m). Facebook has funded 500MW of renewable power in the Commonwealth - more than enough to cover the power used by the Henrico facility. The company says the facility will provide 200 long term jobs, and has sponsored community projects and schools. 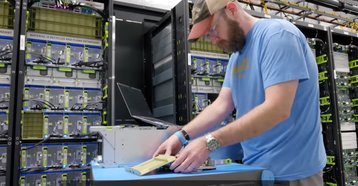 "This isn't just huge for Central Virginia, it's huge for Virginia," said Lamont Bagby, a Democrat in the Virginia House of Delegates, in the same promotional video. "We're building our own little Silicon Valley"

The project was first heard of in September 2017, when Enrico's planning committee approved a 2.5 million sq ft development called Project Echo with an unknown backer. It was formally announced by Facebook in October that year, eased by tax reductions that reduce how much potential money will go to the state and schools.

Since the Covid-19 pandemic hit, Facebook has contributed to projects with Henrico County Public Schools and the Henrico Education Foundation which provide meals for students and WiFi hotspots for students learning at home. The company also pitched in to help community groups with relief grants for small businesses and nonprofits. In Fall, a Community Action Grants program begins, to help with community projects and STEM education.

In Facebook's video, Dr. Amy Cashwell, superintendent of Henrico's schools said the company got in touch with local schools, "as soon as the first shovel went into the ground," adding: "We were so thrilled when we learnt the news that Facebook would be coming to the Henrico area."

The billion-dollar investment in the project will support more than 200 long term jobs, and had over 1,500 construction workers on site at the peak of building, said Rachel Peterson, Facebook's vice president of data center strategy. "We've worked closely with Dominion Energy and other partners, to bring over 500MW of new renewable energy to the Virginia grid," said Peterson. "The Henrico data center is supported by 100 percent new solar energy sourced from Virginia."

"Think about the jobs that are going to be here for the next generation, the suppliers to Facebook and their data center as well as the county businesses," said Anthony Romanello of the Henrico Economic Development Agency. "The bottom line is, it's huge."

"Henrico for us presented the right confluence of everything that was just perfect for us," said Bobby, Hollis director of global energy environment and site selection at Facebook, listing infrastructure, access to renewable energy and a talented pool of employees - "and for us it had an incredible pool of community partners."

"You're inspired by the mission of Facebook every day that you show up for work. knowing how many people that we're reaching across the world," said Jean Normandy, Henrico campus facility director, on the video, "and the fact that we're helping build a better community."