$100 million project to roll-out systems across Europe next year

The European High Performance Computing Joint Undertaking (EuroHPC JU) has chosen the first locations that will host quantum computers under the initiative.

The agency has selected six sites across the European Union to host and operate the first EuroHPC quantum computers in Czechia, Germany, Spain, France, Italy, and Poland. The new quantum computers are expected to be available by the second half of 2023. 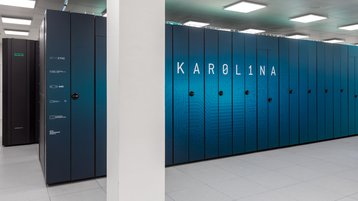 The Karolina system at the IT4Innovations center in Czechia; the center will host a EuroHPC JU quantum system – IT4i.cz

The new systems will be available primarily for R&D purposes to a wide range of European users across the Bloc’s scientific communities, as well as to industry and the public sector.

Margrethe Vestager, Executive-Vice President for a Europe Fit for the Digital Age, said: “This is an example of a European project par excellence. With pooled resources and know-how, we can take leadership in a field that is essential for the future of our digital society. This contributes to our fight against climate change. And it is an essential step of the vision of deploying in Europe a world-class supercomputing and quantum computing infrastructure accessible across the EU.”

The quantum computers will be integrated into already existing supercomputers and the selected hosting entities will operate the systems on behalf of the EuroHPC JU.

In Czechia, a quantum system known as LUMI-Q will be installed at the IT4Innovations National Supercomputing Centre in Ostrava. Vendors for this or the other five systems haven’t been shared.

“LUMI-Q builds on the success of the LUMI consortium, which currently operates the most powerful supercomputer in Europe. Through LUMI-Q, the LUMI ecosystem becomes increasingly inclusive, from both technological and regional perspectives," says Kimmo Koski, Managing Director of Finland’s CSC.

The new systems will be co-funded by EuroHPC JU via the Digital Europe Programme and the 17 participating states. The JU will co-fund up to 50 percent of the total cost, with a planned total investment of more than €100 million ($99.2m), though exact funding arrangements are to be confirmed.

"Of course, I am very delighted that Czechia and our supercomputing centre IT4Innovations have been chosen to host the LUMI-Q quantum computer. I believe that we will be able to create a cutting-edge ecosystem for quantum computing, where the latest quantum technologies will be integrated into the existing European supercomputing infrastructure, which in the future may lead to significant breakthroughs resulting from the convergence of these two fields," states Vit Vondrak, Director of the National Supercomputing Centre IT4Innovations, which is part of the VSB – Technical University Ostrava in Czechia.

So far the EuroHPC JU has procured seven supercomputers, located across Europe: Vega in Slovenia, MeluXina in Luxembourg, Discoverer in Bulgaria, Karolina in the Czech Republic, Deucalion in Portugal, LUMI in Finland, and Leonardo in Italy.

The 314 petaflops Marenostrum 5 in Spain is due to come online next year, and the group has selected Germany’s Forschungszentrum Jülich facilities as the host for its first exascale system. The EuroHPC JU has recently selected a further four sites to host mid-range supercomputers with petascale or pre-exascale capabilities in Greece, Poland, Ireland, and Hungary.

The first two supercomputers at IT4Innovations were the 94 teraflops Anselm launched in 2013 and the 2 petaflops Salomon launched in 2015. Both were decommissioned in 2021.

It currently operates the 849 teraflops Barbora system and a 130 teraflops Nvidia DGX-2 system – both launched in 2019 – as well as the 15.7 petaflops Karolina supercomputer which was put in operation in 2021. The current systems in the 500 sqm (5,380 sq ft) data hall currently draw 1.1MW of power.

Update: Poland's Poznań Supercomputing and Networking Center (PSNC) affiliated to the Institute of Bioorganic Chemistry, Polish Academy of Sciences (PAS) in Poznań will also be hosting a quantum system, as will the Barcelona Supercomputing Center in Spain.

The new infrastructure will be installed and integrated into the MareNostrum 5 supercomputer in collaboration with the Institut de Física de Altes Energies (IFAE) and the International Iberian Nanotechnology Laboratory (INL) in Portugal.

“This new infrastructure, which will integrate quantum computing with MareNostrum 5, one of the most powerful supercomputers in Europe, will allow us to advance multiple academic applications,” said BSC Director Mateo Valero. “This new milestone will enable BSC to play a decisive role in Europe with these new technologies that will be part of the society of the future and reinforces BSC’s role as one of the leaders in European supercomputing.”

In Germany, the Leibniz Supercomputing Centre is set to be the host of the upcoming quantum system. As early as 2023, the LRZ will make the quantum demonstrator Q-Exa, financed by the BMBF, available to European users. A 100-qubit system will then be added in further steps by 2026 via a classic public tender procedure.

Cineca in Italy and GENCI in France were also selected as hosts.