As company plans 10 data centers over the next two years

Durvasula was previously at CyrusOne, where he was at one point interim CEO. He replaces Stephane Duproz, who had led ADC since 2018. 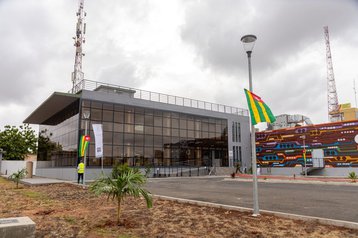 “The potential to grow digital infrastructure is bigger in Africa than anywhere else and this will provide a number of opportunities for economic transformation," Durvasula said.

"I am extremely pleased to be joining Africa Data Centres and Cassava Technologies, especially now as Africa has become one of the fastest-growing data usage regions in the world. I feel we are well poised to make an invaluable contribution to Africa’s rapidly developing digital ecosystem," he added.

Durvasula previously worked at CyrusOne, heading its European efforts. In January 2020, when the company announced mass layoffs, Durvasula said he would depart from CyrusOne.

But a month later, CEO Gary Wojtaszek stepped down suddenly, with Durvasula drafted as interim-CEO. He put himself forward for the full position, but Bruce Duncan was appointed in June (only to suddenly step down a year later).

Durvasula helped with the initial transition, but left CyrusOne in 2020. In his new role he replaces Stephane Duproz, who helped grow ADC into a significant player in the African data center market.

The company currently has or is developing data centers in Lagos, Nigeria; Lomé, Togo; Samrand and Midrand, South Africa; and Nairobi, Kenya. In November, it announced plans for two more data centers in Nairobi and expand its presence in Johannesburg earlier this month. In September, the company revealed a $500 million plan to build 10 data centers across Africa over the next two years.

A 2021 report from African Data Centres Association (ADCA) and Xalam Analytics said that the continent needs 1,000MW & 700 data center facilities in order to meet demand and bring the rest of Africa up the same density as South Africa.

“Following the conclusion of our $300m funding with the US IDFC and the recent US$90m equity investment by IFC, it was imperative that we scale up our management team," Hardy Pemhiwa, president and CEO of Cassava Technologies, said.

“We are delighted to welcome Tesh into the Cassava Technologies family and look forward to leveraging on his extensive industry experience as he leads our data centers business into its next phase of rapid expansion to meet the increased demand for data center capacity in Africa."