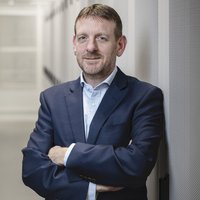 Paul Finch is Chief Operating Officer (COO) at Kao Data, providing strategic direction and oversight to the company with core responsibilities for strategic operations and platform delivery, whilst providing stewardship and policy level leadership to the European and North American data centre industries. Named by Data Economy as one of the “Top Influencers in Data Centres, Cloud and Data”, Paul is a globally respected data centre thought-leader.

During his 30-year career, Paul has played key roles at Fortune 500 corporations and publicly traded REIT's including CBRE and Digital Realty Trust, as well as an established career in engineering consultancy, advisory and project management. In total, he has overseen the creation and execution of global developments exceeding £1.0bn in capital deployment and supporting over 200MW of technical space

Paul is a Chartered Engineer and Fellow of the Institution of Mechanical Engineers, a member of the American Society of Heating, Refrigeration and Air-conditioning Engineers, Voting Executive committee member of ASHRAE’s Technical Committee 9.9 (2014-2018) and sits on the techUK Data Centre council. He holds a BSc (Hons) in Building Services Engineering, a PgDip in Engineering Management and is a graduate of the General Management Programme at the University of Cambridge, Judge Business School.

In 2020, Paul was awarded Sustainability Champion and iMasons 100 Awards by the Infrastructure Masons and presented by the President of ASHRAE with the Global Technology Award for Industrial Facilities and Processes "for the outstanding achievement in the design and operation of energy efficient buildings" relating to the +£230m, 45MW, Kao Data campus.